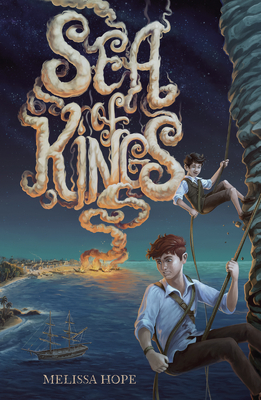 Thirteen-year-old Prince Noa has hated the ocean since the day it caused his mother's death. But staying away from the sea isn't easy on his tropical island home, where he's stuck trying to keep up with his dim-witted and overconfident younger brother Dagan--the brawn to Noa's brains. When a vengeful pirate lays siege to their home, Noa and Dagan narrowly escape with their lives. Armed with a stolen ship, a haphazardly assembled crew, and a magical map that makes as much sense as slugs in a salt bath, the brothers set sail for the realm's other kingdoms in search of help. But navigating the sea proves deadlier than Noa's worst fears. To free his home, Noa must solve the map's confusing charts and confront the legendary one-eyed pirate before an evil force spreads across the realm and destroys the very people Noa means to protect.
My Account • Sign In • Sign Out • Register
NEW & USED BOOKS
AUTHOR EVENTS • GIFTS
Tempe
6428 South McClintock Drive
480.730.0205
[Google Map]
10am-7pm daily
Trade Counter 11am-6pm daily