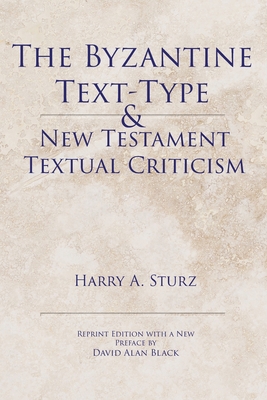 Should the Byzantine text-type be considered valuable in determining the original text of the New Testament? Does it bear independent witness to ancient readings?

Dr. Harry Sturz, in a book published in 1984, maintained that it should be valued and that it could help with finding older readings and thus contribute to our knowledge of and confidence in the text of the Greek New Testament. His position, that the Byzantine text-type should be weighed along with other witnesses to the ancient text, differs from those who dismiss Byzantine manuscripts, which were largely copied later, but also from those who hold that the Byzantine text has priority or even is determinative of what the final reading should be. He uses carefully laid out arguments and numerous specific examples in making his case.

This book is divided into two parts. The first outlines the positions both for relying on the Byzantine text and for largely ignoring it. Part two examines the evidence and outlines an argument that neither side of this debate should win the field, but rather that the Byzantine text should be valued, but not made exclusive.

Energion Publications is pleased to offer this reprint edition, reproducing the text of the old book exactly, and adding a preface by Dr. David Alan Black. We believe that Dr. Sturz's arguments provide a strong case and are as relevant today as they were in 1984. We also believe that not just scholars but all believers should be made aware of discussions about the text of Scripture so that they can understand the arguments for the reliability of the text we have today.

This book is primarily aimed at students of New Testament textual criticism and at scholars who are seeking to refine their art. The first section especially is accessible to any serious reader. While the second section does include Greek text and excellent references, the main argument is clear and accessible.