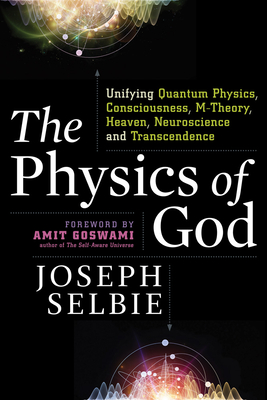 By Joseph Selbie, Amit Goswami, PhD (Foreword by)
$15.99
Email or call for price.

Setting aside the pervasive material bias of science and lifting the obscuring fog of religious sectarianism reveals a surprisingly clear unity of science and religion. The explanations of transcendent phenomena given by saints, sages, and near-death experiencers--miracles, immortality, heaven, God, and transcendent awareness--are fully congruent with scientific discoveries in the fields of relativity, quantum physics, medicine, M-theory, neuroscience, and quantum biology.


Compelling and concise, The Physics of God will make you believe in the unity of science and religion and eager to experience the personal transcendence that is the promise of both.

Joseph Selbie makes the complex and obscure, simple and clear. A dedicated meditator for over 40 years, he has taught yoga and meditation throughout the United States and Europe. He is known for creating bridges of understanding between the modern evidenced-based discoveries of science and the ancient experience-based discoveries of the mystics. Selbie maintains several blogs, including Intersections, which explores how spirituality connects with culture and science. He also authored The Yugas, a factual look at India's tradition of cyclical history; and a sci-fi/fantasy series, The Protectors Diaries, inspired by the abilities of mystics. Joseph is a founding member of Ananda, a meditation-based community and spiritual movement inspired by Paramahansa Yogananda. He lives with his wife at Ananda Village near Nevada City, California. For more information, go to
www.PhysicsAndGod.com.

"The book combines science and religion in a way that can change how the reader views reality, the material world, God, and how they see themselves." --New Spirit Journal
— Reviews

"The Physics of God is an impressive and thought-provoking work which should be regarded as an important commentary regarding the metaphysical mysteries of life, physical reality, and human consciousness. Highly recommended!" --Spirituality Today
— Reviews

"In The Physics of God, Selbie clearly describes why phenomena labeled 'transcendent,' 'paranormal,' or 'spiritual,' are more consistent with a modern scientific understanding of reality than is commonly supposed. A well-written metaphysical journey into an uncertain but perennially fascinating domain." --Dean Radin, PhD, chief scientist, Institute of Noetic Sciences, author of Supernormal and Entangled Minds
— Reviews

"The Physics of God is the best book on the subject that I have ever read. It is a clear and lucid explanation of the interface between science and spirituality, as well as consciousness and matter. Anyone, scientist or layman, will benefit from this marvelous book." --Jyotish Novak, author of How to Meditate and Touch of Light
— Reviews

"Selbie does an excellent job of dispelling the myth that religion and science are incompatible. His unbiased comparison of the findings of science with the testimony of those who have had profound spiritual experience reveal a clear underlying unity. The Physics of God is clear, simple, and engaging!" --Susan Shumsky, award-winning author of Divine Revelation and Awaken Your Third Eye
— Reviews