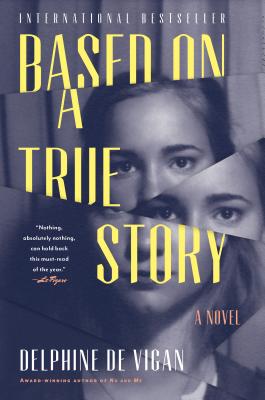 From the minute I picked up this book, I was sucked in. An artful blurring of fact and fiction, Based on a True Story is an intriguing psychological drama that just so happens to be gorgeously written! Delphine is both the author and the narrator and her keen observations set this book apart. She muses on her place in the world, the nature of womanhood in general, her immediate, insidious friendship with L., and so much more--I was riveted! If you enjoyed SWF as a cautionary tale, if you disavow "squad goals", if you wish more authors inserted themselves in their narratives, then this is the book for you.

The international hit that sold half a million copies in France: a chilling work of fiction--but based on a true story--about a friendship gone terrifyingly toxic and the nature of reality.

Overwhelmed by the huge success of her latest novel, exhausted and suffering from a crippling inability to write, Delphine meets L.

L. embodies everything Delphine has always secretly admired; she is a glittering image of feminine sophistication and spontaneity and she has an uncanny knack of always saying the right thing. Unusually intuitive, L. senses Delphine's vulnerability and slowly but deliberately carves herself a niche in the writer's life. However, as L. makes herself indispensable to Delphine, the intensity of this unexpected friendship manifests itself in increasingly sinister ways. As their lives become more and more entwined, L. threatens Delphine's identity, both as a writer and as an individual.

This sophisticated psychological thriller skillfully blurs the line between fact and fiction, reality and artifice. Delphine de Vigan has crafted a terrifying, insidious, meta-fictional thriller; a haunting vision of seduction and betrayal; a book which in its hungering for truth implicates the reader, too--even as it holds us in its thrall.

Delphine de Vigan is the author of several novels, three of them available in English: No and Me, awarded the 2008 Prix des Libraires (Bookseller's Prize); Underground Time, shortlisted for the 2009 Prix Goncourt; and Nothing Holds Back the Night, awarded the Prix du roman Fnac, the Prix Roman France Télévisions, and the Prix Renaudot des Lycéens. De Vigan lives in Paris.

"The horrors of authorship . . . provide especially good material for psychological thrillers . . . [and] a twisted, witchy relationship that’s closer to identity theft than friendship . . . The final coup de grâce . . . will leave you with questions about the nature of reality and sanity.” - The New York Times Book Review

"If Simone de Beauvoir had written Single White Female with nods to Marguerite Duras, the result might be something like this latest Gallic grip-lit sensation." - The Guardian

"A powerful novel of suspense that may or may not be based on truth . . . A creepy tale of female friendship gone wrong; vampirism of the emotional kind." - NPR, “Our Guide to 2017’s Great Reads”

"With her children off to college and her documentary filmmaking lover abroad, a novelist meets an impeccably elegant ghostwriter who deftly takes over her life and saps, succubus-like, her will to write and, nearly, to live. By the end of the book, the lines between reality, fiction and madness are blurred to the point where it isn't clear if they can be redrawn." - The New York Times, “10 French Novels to Read Now”

"The next Gone Girl." - The Daily Telegraph

"A superior identity-theft thriller on the same spectrum as The Talented Mr Ripley, or Single White Female . . . De Vigan has produced a concept thriller with a lavish dash of theorising about the status of fiction and reality that flatters us readers as we realise, finally, this is all made up and the novel's ultimate point--neatly and cleverly made--is that fiction is the way we come to understand the truth of reality." - Sunday Times

"A wonderful literary trompe l'oeil, a novel about identity and writing, reality and imagination. It's dark, smart, compelling and extremely French." - The Observer

"A subtly told story of an obsessive female friendship that steadily consumes both of the women. There is an added riddle, however. The novelist in the thriller is also called Delphine. So is this a hyper-realist story based in truth or is it a work of pure fiction? We can't be sure. This is that rare beast--a fine thriller and a potential literary sensation. Patricia Highsmith would have been proud. Don't miss." - The Daily Mail

"All writing is constructed on shifting sands, but I've never read a book that makes the complex relationship between reality and fiction both as visible, and at the same time so opaque, as here. I was captivated. Combining the allure of Gone Girl with the sophistication of literary fiction, Based on a True Story is a creepy but unapologetically clever psychological thriller that also aces the Bechdel test." - The Independent

"The insidious nature of a complex mind game masquerading as friendship is chilling to watch unfold." - Publishers Weekly

"Based on a True Story is both a clever, gripping psychodrama about an obsessive, toxic friendship and a literary exploration of the blurred lines between reality and fiction." - Kirkus Reviews

"A smart, elegant thriller . . . A fine portrait of predation as real as anything in the jungle; scary and persuasive." - Library Journal

"This book is a commentary on fiction, nonfiction, the ever-expanding space between the two, and how we approach that space, as writers and readers. It's a literary thriller, and it's a cautionary tale about the dangers of letting life and literature become too entwined." - The Rumpus

"When a writer befriends a ghostwriter, the scene is set for a tension-filled tale about a tangled, stifling relationship that gleefully channels both Stephen King's 'Misery' and 1992's 'Single White Female.'" - Boston Globe

"Ever since Gone Girl there have been many attempts at thrillers involving unreliable narrators, but I believe this is the very best of them . . . Utterly brilliant." - The Spectator

"Not your ordinary book. A darkly playful post-modern read . . . What begins as a seemingly straight-forward tale of a tainted friendship which set the author off course evolves in a fun-house mirror reflecting alternating truths and fictions while questioning the very nature of madness and reality. It's a book even Nabokov could enjoy. Grade: A." - The Cleveland Plain Dealer, "Beach Reads: Scorching Summer Mysteries for 2017"

"Days after I finished this book I found myself haunted by the characters, and I read it a second time looking for clues I might have missed. I found it just as gripping the second time even knowing the ending." - The Missourian

"De Vigan's latest is a thoughtful exploration of the relationship between truth and literature, the responsibility of a writer to his or her readers, and the way in which people use fiction to make sense of reality." - Mystery Scene Magazine

"A chilling tale of obsessive female friendship that keeps you guessing until the last page. What is reality? What is fantasy?" - Tatler