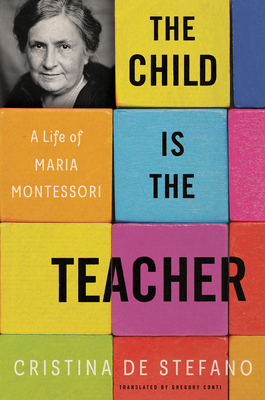 A fresh, comprehensive biography of the pioneering educator and activist who changed the way we look at children’s minds, from the author of Oriana Fallaci.

Born in 1870 in Chiaravalle, Italy, Maria Montessori would grow up to embody almost every trait men of her era detested in the fairer sex. She was self-confident, strong-willed, and had a fiery temper at a time when women were supposed to be soft and pliable. She studied until she became a doctor at a time when female graduates in Italy provoked outright scandal. She never wanted to marry or have children—the accepted destiny for all women of her milieu in late nineteenth-century bourgeois Rome—and when she became pregnant by a colleague of hers, she gave up her son to continue pursuing her career.
At around age thirty, Montessori was struck by the condition of children in the slums of Rome’s San Lorenzo neighborhood, and realized what she wanted to do with her life: change the school, and therefore the world, through a new approach to the child’s mind. In spite of the resistance she faced from all sides—scientists accused her of being too mystical, and the clergy of being too scientific, traditionalists of giving children too much freedom, and anarchists of giving them too much structure—she would garner acclaim and establish the influential Montessori method, which is now practiced throughout the world.
A thorough, nuanced portrait of this often controversial woman, The Child Is the Teacher offers an unbiased perspective from an author who is not a member of the Montessori movement, but who has been granted access to original letters, diaries, notes, and texts written by Montessori herself, including an array of previously unpublished material.

Cristina De Stefano is a journalist and writer. She lives and works in Paris as a literary scout for many publishing houses around the world. Her books Belinda e il mostro: Vita segreta di Cristina Campo (2002) and Americane avventurose (2007) have been translated into French, German, Spanish, and Polish. Her biography Oriana Fallaci: The Journalist, the Agitator, the Legend was published by Other Press in 2017.

Gregory Conti has translated numerous works of fiction, nonfiction, and poetry from Italian including works by Emilio Lussu, Rosetta Loy, Elisa Biagini, and Paolo Rumiz. He is a regular contributor to the literary quarterly, Raritan.

"In short, vignette-style chapters De Stefano documents Montessori’s unusual and groundbreaking career path…Montessori never abandoned her faith in the idea that all children, rich and poor, should be more valued, supported, and empowered. And whether we embrace her educational methods or not, in that sense we should all be more Montessorian.” —Washington Post

“Readers of feminist history will savor this evenhanded profile of a groundbreaking educator and businesswoman.” —Publishers Weekly

“A balanced, well-written, and clear-eyed portrait of a complex, trailblazing woman.” —Library Journal

“[The Child Is the Teacher] goes beyond the typical accounts written by disciples…It is remarkable how much of Montessori’s radical critique still rings true today.” —Reason

“In over fifty years of reading and writing about Maria Montessori, I have never found a book, except those written by Dr. Montessori herself, that I could read from cover to cover. The Child Is the Teacher is essential for anyone interested in education, in Montessori schools for children, and in Montessori teacher training for adults.” —Susan Mayclin Stephenson, author of The Joyful Child: Montessori, Global Wisdom for Birth to Three

“De Stefano’s lively new biography of Montessori is a feast—a sympathetic yet clear-eyed view of a complex, revolutionary genius whose mission was to shed new light on children, revealing conditions wherein they become the hope for all humanity. The book is extensively researched and filled with novel insights and information.” —Angeline S. Lillard, Professor of Psychology, University of Virginia

“Cristina De Stefano brings Maria Montessori to life in her important new biography, The Child Is the Teacher. With a fresh, objective perspective as a thoughtful Italian journalist, she gained access to many new original sources that offer a unique window into the life and thoughts of one of the twentieth century’s leading agents of social change and the founder of a global movement to transform education that also led to contemporary brain research. Montessori’s life is a fascinating story in itself. This book will be a must-read work.” —Tim Seldin, President of The Montessori Foundation and Chair of The International Montessori Council

“Weaving history and narrative, Cristina De Stefano takes us on the journey of feminist radical and progressive educator Maria Montessori, from her early days in the anatomy room to the hollowed-out buildings of San Lorenzo, where she envisioned a new pedagogy that placed autonomy at the center of a child’s social and intellectual development. A fascinating portrait of the controversial woman behind ‘The Children’s School,’ The Child Is the Teacher shows how the revolutionary idea about children’s rights depended on a new, peaceful philosophy of humanity.” —Jaipreet Virdi, author of Hearing Happiness: Deafness Cures in History

“It’s the first authorized biography we have of Fallaci, with access to new personal records, and welcome for that reason…it gets her story onto the page and, thanks to its subject, is never dull.” —New York Times