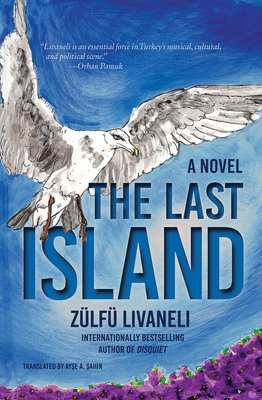 From the internationally bestselling author of Disquiet, a brilliant political allegory that vividly illustrates how capitalism and authoritarianism harm us and the environment.

Having failed to hold onto power after an ironfisted first term, the former President moves to a secluded island and decides to rid it of what he sees as its “anarchic” components. The island, described by its close-knit community as a utopia, the last peaceful resort for humankind, morphs into dystopia when the President, in the hope of bringing order to island life, begins to act more and more like a dictator. The first ones to revolt against him are the seagulls.
Originally written in 2008 as a condemnation of the authoritarian Turkish regime, The Last Island has only grown more relevant, foreshadowing the events and aftermath of Istanbul’s bloody Gezi Park/Taksim Square political protests of 2013, as well as the protest movements of our time.

Zülfü Livaneli is Turkey’s best-selling author and a political activist. Widely considered one of the most important Turkish cultural figures of our time, he is known for his novels that interweave diverse social and historical backgrounds, figures, and incidents, including the critically acclaimed Bliss (winner of the Barnes & Noble Discover Great New Writers Award), Serenade for Nadia (Other Press, 2020), Disquiet (Other Press, 2021), Leyla’s House, and My Brother’s Story, which have been translated into thirty-seven languages, won numerous international literary prizes, and been turned into movies, stage plays, and operas.

Ayşe A. Şahin is a Turkish-American bilingual translator and language educator based in Istanbul.

“This haunting fable of a President’s war against seagulls feels all the more relevant to our times in its absurdity and heartbreak. Livaneli has written a lucid account of a community’s shattering alongside natural devastation. A wise and piercing book.” —Ayşegül Savaş, author of White on White and Walking on the Ceiling

“In this beautifully written book, Livaneli poetically recounts the story of how societies get corrupted by self-serving autocratic leaders. Livaneli’s riveting The Last Island provides a much-needed and uplifting read for all in need of resilience and hope.” —Soner Cagaptay, author of A Sultan in Autumn: Erdogan Faces Turkey’s Uncontainable Forces

“Urgent and allegorical, Livaneli is masterful in his depiction of how authoritarian power destroys a community’s people and environment. The Last Island is a stunning novel that will stay with me for a long time.” —Mina Seçkin, author of The Four Humors

“This book is a recipe of what authoritarianism is made of. Some readers might start the reading thinking this is only directed to current politics in Turkey. However, it quickly emerges that it is about decades of power struggles, with a message that within this vicious circle there are no happy endings.” —Louis Fishman, author of Jews and Palestinians in the Late Ottoman Era 1908–1914: Claiming the Homeland

“Human nature and authority come face to face in Livaneli’s unparalleled, creative novel. The author invites us to rethink the world we live in.” —Lenore Martin, Emmanuel College and Harvard University

“With this novel Livaneli has entered through the grand gates of literature.” —Yashar Kemal, author of Memed, My Hawk

“[An] arresting novel.” —The New Yorker

“A tale of identities colliding from a writer who’s held five passports…[Disquiet] unfolds in a border town caught between its ancient past and tumultuous present.” —NPR, All Things Considered

“A keenly wrought story…[whose] urgency comes through in its tight grasp on the problems of religious violence, misogyny, and the failures of compassion. The result is a memorable illumination of the Ezidi people’s rich history.” —Publishers Weekly