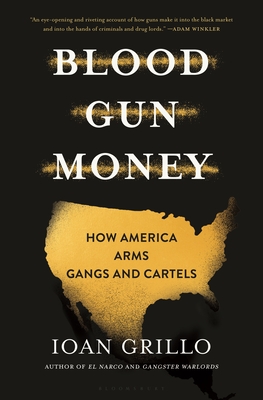 “An eye-opening and riveting account of how guns make it into the black market and into the hands of criminals and drug lords.” –Adam Winkler

From the author of El Narco, a searing investigation into the enormous black market for firearms, essential to cartels and gangs in the drug trade and contributing to the epidemic of mass shootings.

The gun control debate is revived with every mass shooting. But far more people die from gun deaths on the street corners of inner city America and across the border as Mexico's powerful cartels battle to control the drug trade. Guns and drugs aren't often connected in our heated discussions of gun control-but they should be. In Ioan Grillo's groundbreaking new work of investigative journalism, he shows us this connection by following the market for guns in the Americas and how it has made the continent the most murderous on earth.

Grillo travels to gun manufacturers, strolls the aisles of gun shows and gun shops, talks to FBI agents who have infiltrated biker gangs, hangs out on Baltimore street corners, and visits the ATF gun tracing center in West Virginia. Along the way, he details the many ways that legal guns can cross over into the black market and into the hands of criminals, fueling violence here and south of the border. Simple legislative measures would help close these loopholes, but America's powerful gun lobby is uncompromising in its defense of the hallowed Second Amendment. Perhaps, however, if guns were seen not as symbols of freedom, but as key accessories in our epidemics of addiction, the conversation would shift. Blood Gun Money is that conversation shifter.

Ioan Grillo is a contributing writer at the New York Times specializing in crime and drugs. Based in Mexico City, he has also worked for Time magazine, the History Channel, CNN, Reuters, the Associated Press, and Esquire. He is the author of El Narco, a finalist for the Los Angeles Times Book Award, and Gangster Warlords, a New York Times Book Review Editor's Choice and a Guardian Book of the Year.

"With conversational prose and audacious reporting, [Grillo] etches brisk vignettes of A.T.F. agents, gunrunners, hit men and straw purchasers, switching among more characters and exotic locales than an international thriller — from a peace activist near a gun factory in Germany’s Black Forest to ‘Fresa,’ an executioner of 45 who eventually dies by the gun himself." - The New York Times Book Review’s The Shortlist

"Ioan Grillo is one of the best reporters covering the cartels, crime and carnage south of the border. In Blood Gun Money, he traces the drug-gun pipeline that runs straight from that violence to the beating heart of America. It's even weirder and bloodier than the fiction." - Don Winslow, author of THE CARTEL and THE BORDER

"Grillo approaches the issue of proliferating firearms from myriad angles. . . . [He] brings more than two decades of intimate experience to the task, much of that spent in Mexico covering the impact of the ‘iron river’ of firearms that flows south from America into the hands of drug cartels and remorseless gangsters." - USA Today

"Cuts to the chase in its multifaceted portrayal of an enduring battle. . . . an even-handed portrayal of the often frustrating pervasiveness of the gun traffic, interviewing scores of individuals who are on both sides. Investigative Journalism has never felt so palpably poignant." - City Book Review

"Grillo has a well-deserved reputation as a fierce investigative reporter in Latin America . . . now he focuses his attention on the ‘iron river’ of legal guns that go on the black market through private sales, theft, and shady purchasing to make the Americas so murderous. . . . [A] shocking, arresting account of gun trafficking." - National Book Review

"An alarming and deeply reported account of how the U.S. gun trade fuels bloodshed, terror, and refugee crises throughout the Western hemisphere . . . This expert account makes the high cost of America’s thirst for guns crystal clear." - Publishers Weekly, starred review

"Blood Gun Money is a solid account that offers a fresh perspective on an issue that has significant domestic and international ramifications." - Bookbrowse

"Written in a gripping narrative style and with details gleaned from firsthand reporting, Ioan Grillo has written a vitally important book about the 'iron river.' " - Jon Lee Anderson, author of CHE GUEVARA

"While Americans fear mass shootings, Ioan Grillo’s fascinating and well-researched book shows that gun trafficking is the most important gun issue of our time." - Adam Winkler, author of GUNFIGHT

"Ioan Grillo is one of the bravest and most thoughtful journalists in the world. If you want to know what's really going on, you have to read him—and especially this excellent book." - Johann Hari, author of CHASING THE SCREAM

"A globe-trotting investigation into the symbiotic worlds of the gun trade and organized crime, mostly involving drugs—one terrifying, amazing, illuminating story after another, and characters who dismay, chill, awe and sometimes even inspire. Reaching the end of this utterly absorbing journey, you'll feel like you've learned secrets and truths of the tragic lethal mayhem of the world, of its intractable causes and complexities." - Francisco Goldman, author of THE ART OF POLITICAL MURDER

"Gripping. The definitive story of how, for decades, hundreds of thousands of firearms bought legally in the United States have been smuggled into Mexico and fueled unspeakable violence." - León Krauze, Univision

"A haunting investigation into one of humanity's most urgent battles. Both heartbreaking and impossible to put down." - Matthew Heinemann, Director of the Oscar-nominated Cartel Land and A Private War

"Magnificent. A must read for anyone interested in the river of lead that drives the global illicit economy." - Alejandro Hope, Security Analyst, El Universal

"A striking report on the fanatical promotion of guns’ enormous, painful consequences in the U.S., Mexico and Latin America." - Temoris Grecko, author of KILLING THE STORY

"A finger of truth pointing North from the Mexican border, showing how the gun, so beloved by American libertarians and lobbyists, has sown death and destruction South of the border. Grillo isn’t just a brilliant writer. He’s a modern Dante." - Iain Overton, author of GUN BABY GUN and Executive Director of Action on Armed Violence

"Combines academic rigor with street smarts to take us on a journey around the globe to meet obscure firearm manufacturers, hitmen pulling the trigger, and the many people on the receiving end of gunfire. In painstaking detail, Grillo lays out the evidence and history we need to understand how the United States became the center of the global iron river of firearms, and how the consequences of gun violence reach all of us." - Jorge Valencia, The World

"Blood Gun Money . . . reveals the uncomfortable truths very well covered by governments, tracing a map from the U.S. to the Mexican, Central American and even South American cartels." - AL DÍA

"A cutting-edge expose . . . highly informative . . . a testament to Grillo’s ongoing investigative prowess and fosters our better understanding of the criminal insurgencies and illicit flows taking place in the Western hemisphere." - Small Wars Journal

"Excellent . . . Blood Gun Money includes a lot of information about gun trafficking in the Americas, but it is also filled with stories of people on both sides of the law, police and criminals, murderers and gun victims. It is a well-researched, well-written, and informative book." - Center for Economic and Policy Research (CEPR)

"Grillo makes a convincing case for legislative reform, but he also provides readers with on-the-ground insight into the far corners of the gun trade and its illicit shadow worlds. The result is an impactful book that will drive readers forward to the desperate conclusion." - CrimeReads, Best True Crime Books of 2021