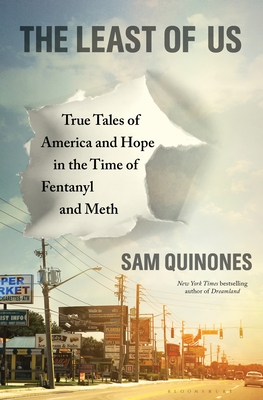 From the New York Times bestselling author of Dreamland, a searing follow-up that explores the terrifying next stages of the opioid epidemic and the quiet yet ardent stories of community repair.

Sam Quinones traveled from Mexico to main streets across the U.S. to create Dreamland, a groundbreaking portrait of the opioid epidemic that awakened the nation. As the nation struggled to put back the pieces, Quinones was among the first to see the dangers that lay ahead: synthetic drugs and a new generation of kingpins whose product could be made in Magic Bullet blenders. In fentanyl, traffickers landed a painkiller a hundred times more powerful than morphine. They laced it into cocaine, meth, and counterfeit pills to cause tens of thousands of deaths—at the same time as Mexican traffickers made methamphetamine cheaper and more potent than ever, creating, Sam argues, swaths of mental illness and a surge in homelessness across the United States.

Quinones hit the road to investigate these new threats, discovering how addiction is exacerbated by consumer-product corporations. “In a time when drug traffickers act like corporations and corporations like traffickers,” he writes, “our best defense, perhaps our only defense, lies in bolstering community.” Amid a landscape of despair, Quinones found hope in those embracing the forgotten and ignored, illuminating the striking truth that we are only as strong as our most vulnerable.

Weaving analysis of the drug trade into stories of humble communities, The Least of Us delivers an unexpected and awe-inspiring response to the call that shocked the nation in Sam Quinones’s award-winning Dreamland.

Sam Quinones is a journalist, storyteller, former LA Times reporter, and author of four acclaimed books of narrative nonfiction, including New York Times bestseller and National Book Critics Circle Award winner Dreamland: The True Tale of America's Opiate Epidemic. "The most original writer on Mexico and the border" (San Francisco Chronicle), he lives with his family in Tennessee.

"This layered chronicle traces how methamphetamine and fentanyl became scourges of American life. . . . Quinones places the narrative in a range of illuminating contexts, including the brain chemistry of addiction; how an overdose in Akron, Ohio, led investigators to dealers based in China; and the decline of America’s deindustrializing towns and cities." - The New Yorker

"Sam Quinones is perhaps our best big-picture analyst of America’s markets for addictive drugs. . . . He is a fluent storyteller who delivers his argument through a palette of affecting stories about people and communities torn apart, and about the small, step-by-step reclamations earned through patient, daily, humble work. Few readers will keep dry eyes through the entire book" - Washington Post

“American pain. This is the territory of Sam Quinones, a masterly reporter and vivid, lyrical writer, whose last book, Dreamland won a National Book Critics Circle Award and awakened readers to the problem of opiate addiction in the United States. . . . In The Least of Us, Quinones applies a similarly kaleidoscopic approach to ‘designer drugs’ like fentanyl and methamphetamine.” - New York Times Book Review

“Jam-packed with amazing facts and, like all of Quinones' work, reads like a thriller. You may think you know this story. Trust me, you don't. I normally don't write book reviews, but Quinones' book is well worth your time.” - Ann Coulter, Townhall

“Together with his earlier Dreamland, The Least of Us confirms his place as a leading chronicler of an American nightmare.” - New York Journal of Books

“Chronicles how meth-ravaged communities have broken the cycle of drug abuse, violence and despair.” - Los Angeles Times, 11 Books to Add to Your Reading List

“Sam Quinones is the indispensable ground-level guide to the epidemics of addiction that plague so many Americans. In The Least of Us, the tales of despair are brightened by seeing communities beginning to adapt and regrow to fight the horror that besets them. Everyone should read this.” - Angus Deaton, Nobel Laureate in Economics and co-author of DEATHS OF DESPAIR

“This well-researched follow-up traces the next stage of the epidemic, with synthetic drugs and the next generation of kingpins. There is plenty of heartache, yes, but there is also hope in its exploration of communities trying to repair themselves.” - New York Post

“When I was chairman of the Senate health committee in 2018 and we were focused on developing legislation to address the nation’s opioid crisis, I held a hearing where Sam Quinones was the only witness. Such is Quinones’ command of the issue and the usefulness of his insights for our nation. In The Least of Us, Quinones has continued his meticulous reporting to capture a full picture of how America’s communities are working to resist the damage caused by illegal synthetic drugs – and also to fight the epidemic of isolation by repairing the threads of connection that have so badly frayed.” - Sen. Lamar Alexander

“With deep compassion and piercing insight, Sam Quinones beautifully captures the pain of America's opioid addiction and the gaping holes in society that allowed the tragedy to fester. He then not only offers condemnation of how we got here but true hope of how we can get out.” - Ioan Grillo, author of BLOOD GUN MONEY

“With The Least of Us, Sam Quinones continues to be the preeminent chronicler of the national opioid epidemic. By combining rigorous research, keen insight and listening to people’s stories across the country, Sam has once again captured not only the pain and sadness but the resiliency and optimism that have come to be the hallmark of this epidemic.” - Michael Botticelli, Former Director, White House Office of National Drug Control Policy

“Journalist Quinones follows Dreamland with a sweeping portrait of the destruction wrought by pharmaceutical companies, Mexican cartels, and other drug profiteers, and an inspirational call for a renewed sense of community to combat the isolation of addiction . . . This is a richly rewarding report from the front lines of an ongoing emergency.” - Publishers Weekly, starred review

“Readers looking for the latest take on the drug trade and recovery as well as those who flock to well written journalism will dig into this.” - Booklist

“In a follow-up to his widely acclaimed Dreamland, Quinones explores the fentanyl and meth crisis sweeping the U.S. while at the same time spotlighting the moments of hope and community that keep us going. From the wreckage of ruined lives come stories of faith, trust and belief in our fellow humans.” - Newsweek

“Outstanding ... elegantly written … Quinones has perfected his method of merging big-picture cause-and-effect analyses of the economics and neuroscience of drugs with illustrative human-interest stories of Americans swept up in this national catastrophe.” - Taki's Magazine

"[Dreamland] dug deeply into the circumstances and lives of the people who created, profited, battled, and suffered from the drug epidemic that has devastated huge swaths of the heartland beginning in the 1990s. . . . The Least of Us picks up where Dreamland left off and describes how the drug crisis — fueled as much by the Sacklers as by Mexican traffickers — has evolved." - Washington Independent Review of Books

“A painful sequel [to Dreamland] because it’s an admission that we haven’t beaten the national opioid addiction. Far from it. Quinones makes the convincing case that the problem has simply moved underground, changing locations from the doctor’s office to back alleys, or to the internet, where users purchase drugs from shady Mexican or Chinese chemical providers.” - Jacobin

“A heartrending depiction of the current phase of the quixotic drug war. Sam Quinones covers the human drama with an admirable empathy … The stories offered will remain ingrained in the reader’s mind because they’re so powerful.” - Seattle Book Review