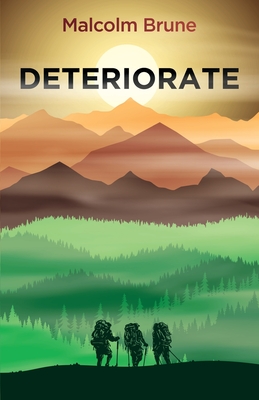 As they strapped their packs on, they heard thunder rumbling far in the distance. Nick shivered and Jordan steeled her jaw. Wordlessly, they picked up the pace. They were just short of running down the rocky mountainside. Nick was hopping rock to rock, straining his knees as much as he could bear, with his sights set on the treeline a mile away.

Have you ever wondered how the earth will look or how your life might change in a mere thirty years? Deteriorate's Theo Wilson doesn't have to wonder. He has been living in a world in which people stopped caring about the environment. Wilson is now on a quest to awaken the masses.

It's the year 2050. Theo, Nick, and Jordan set off on a month-long backpacking trip to relive the trek they took thirty years earlier when in high school. Except the landscape-and the people-now look much different. Climate change has invaded all aspects of their lives-housing, education, even international relations. The three find more than they expected, and now they need to do something about it.

Three friends. Two trips. One goal. What they discover about climate change will not soon be forgotten...again.