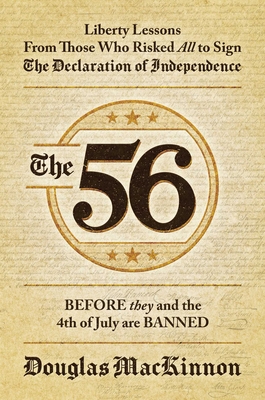 The urgent need to honor the 56 Signers of The Declaration of Independence came to Douglas MacKinnon, fittingly enough, on the 4th of July.

While doing research for a column meant to remind the American people of that date’s critical importance, he came across example after example of those from the Left and the Far-Left––be they in the mainstream media, activists, or anarchists––calling for not only the “canceling” of the 4th of July, but the continued smearing, censorship, and canceling of our Founding Fathers.

One overriding thought then filled his mind:

“What if they are successful?”

Those who believe such totalitarian censorship could never come to be in the United States of America, need only review how quickly and brutally many on the Left were able to create the “Woke Cancel Culture” to silence those they oppose today.

Now they come for Thomas Jefferson, Richard Henry Lee, Benjamin Franklin and others who courageously signed The Declaration of Independence.

That document and those men created our history. History which should never be bent, twisted, censored, or banned to fit any ideological narrative. If it is good, let us praise it. If it is bad, let us condemn it and learn from it. But let us never twist, censor, or cancel it.

And yet, more and more followers of the Left want to do just that. As they control the media, academia, entertainment, science, and medicine…who is to stop them?

Time is of the essence. We must find our voices. The 56 left the blueprint: Liberty.

Douglas MacKinnon is a former White House and Pentagon official and bestselling author working with other former government officials to establish a Foundation to preserve the history and protect the reputations of our Founding Fathers.