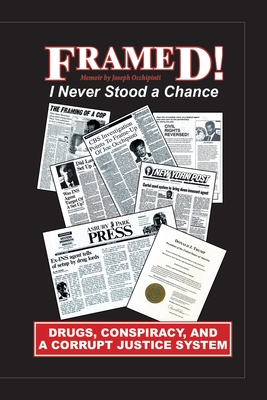 Joseph Occhipinti is a native New Yorker where his desire to be involved in community service led him to a career in law enforcement. He graduated from Brooklyn College where he earned a BA degree.

In January 1969, Joe joined the U.S. Army Reserves, where for six years he served as a Military Policeman. In March 1972, Joe was appointed as a Customs Patrol Officer where he was assigned to investigate international smuggling and organized crime.

In 1976, Joe transferred to the INS as a Special Agent where he became one of the country's foremost experts on ethnic organized crime. Joe worked deep undercover and infiltrated a drug cartel that led to one of the largest cocaine seizures at that time. In 1984, Joe became the youngest agent to be promoted to Chief of the NYC Anti-Smuggling Unit.

In 1989, Joe initiated a multi-agency task force "Project Bodega" to investigate a drug cartel implicated in the murder of a NYPD officer. In retaliation, the cartel set-up Joe on fabricated civil rights allegations that led to his prosecution, conviction and imprisonment. However, due to public outrage, President George H.W. Bush granted Joe "Executive Clemency" on January 15, 1993 and on December 23, 2020, President Donald J. Trump granted him a "Full and Unconditional Pardon" with a personal apology for Joe's injustice.

In 1995, Joe established the National Police Defense Foundation, where he still volunteers as its Executive Director. Joe has been instrumental in exposing through national media many injustices against officers. He also established the congressionally recognized "Safe Cop" program that helps arrest and convict criminals who shoot at or kill an officer.

Joe's notoriety as a humanitarian is attributed to his "Operation Kids" program which arranges life-saving operations for children worldwide. Joe has been recognized for these efforts by the media, elected officials, state legislatures and foreign governments, including Pope Francis.

Joe served on the executive board of several fraternal police organizations which included the Federal Agents PBA as President for 18 years. Today, Joe is considered one of the most decorated federal agents in the United States, credited with 3 Attorney General Awards and 78 commendations for meritorious service and valor.

Joe resides in New Jersey with his wife, Angela of 50 years, 3 married daughters and 6 grandchildren.