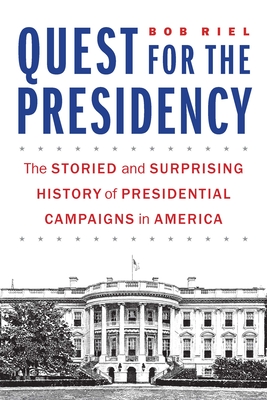 Quest for the Presidency gathers in a single volume the compelling stories behind every presidential campaign in American history, from 1789 through 2020. Bob Riel takes us inside the 1800 clash between Thomas Jefferson and John Adams, the 1860 election that launched the Civil War, the 1948 whistle-stop comeback of Harry Truman, the Kennedy-Nixon drama of 1960, the 1980 Reagan Revolution, the historic 2008 election of Barack Obama, the turbulent 2020 battle between Joe Biden and Donald Trump, and everything in between.

This engaging and insightful book includes a trove of entertaining stories about campaigns and candidates, and it goes beyond the campaign tales to also consider the threads that link elections across time. It sheds light on the continually evolving story of American democracy in a way that helps us to better understand present-day politics.

Bob Riel is an author and freelance journalist who has written about history, politics, and travel for a variety of publications. He earned a master’s degree in political science from Boston College, with a focus on the history of American presidential elections.

"Riel delivers a comprehensive and readable volume on American presidential elections, one that contains plenty of tea leaves for political junkies to interpret in their effort to learn what will happen next."—Todd Carney, Real Clear Politics

"George Washington didn't campaign for the presidency. He was chosen unanimously by the Electoral College. However, the first President of the United States set a precedent by traveling to each of the 13 states while in office—a difficult task in an age of bumpy dirt roads. Bob Riel reminds us of this in Quest for the Presidency, his enjoyable tour of the usually more contentious runs for the Executive Mansion."—David Luhrssen, Shepherd Express

“Every presidential campaign is a story. This book tells each of the fifty-nine stories with superb narrative skill. It captures the passion and excitement of each campaign and weaves them together into one big story: the regular testing of the viability of American democracy.”—Bill Schneider, former CNN senior political analyst and professor emeritus at the Schar School of Policy and Government at George Mason University


“How did we get into the (disputed by some) 2020 election mess? Bob Riel reveals its toxic roots by guiding us through past presidential contests, pointing out messes, mischief, malfeasance, and near-misses—and the remarkable resilience of democracy in the United States.”—Mark Stein, author of The Presidential Fringe and How the States Got Their Shapes


“In this striking book, Bob Riel surveys the whole panorama of American history through the lens of its presidential campaigns. These quadrennial contests have been called the only times the nation really comes together to talk to itself, and Riel shows us just how colorful, dysfunctional, jangling, and entertaining those conversations have always been. Even the experts will learn something they didn’t know from the well-chosen details within—memorable and revealing snippets from our grand national heart-to-heart with each other.”—Tom Zoellner, author of Island on Fire, winner of the 2020 National Book Critics Circle Award for nonfiction


“As Bob Riel so masterfully illustrates in his book, Americans have been at each other’s throats for more than two hundred years now. We’ve witnessed moments of great presidential grandeur and ludicrous folly. Occasionally, our passions have drawn blood. Through it all, presidential elections have reinvigorated the body politic or bored us into staying home on election day. . . . You don’t need to be a presidential historian to get drawn into this well-crafted yarn of uniquely American stories, traditions, triumphs, and disappointments. Riel brings the reader along for a journey, dipping into critical moments of history with fascinating anecdotes, twists and turns in our collective story that we might not know as well as we thought.”—Tom Costello, Washington correspondent for NBC News


"In his 2022 work Quest for the Presidency: The Storied and Surprising History of Presidential Campaigns in America, author Bob Riel has written the book that POTUS geeks and those enamored with Presidential History have been waiting for. In an efficient yet informative and engaging style of writing, the author looks at every Presidential election from George Washington's acclamation in 1789 to the tumultuous contest of 2020, held during a pandemic. He does so with a discerning eye and a keen analytical mind, searching for patterns and brilliantly observing how the more things change, the more they stay the same."—potus-geeks.livejournal.com