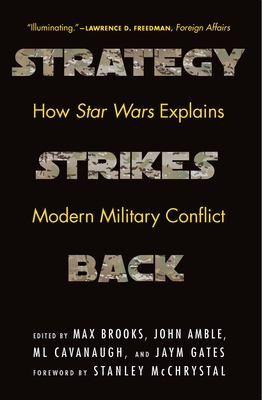 The most successful film franchise of all time, Star Wars thrillingly depicts an epic multigenerational conflict fought a long time ago in a galaxy far, far away. But the Star Wars saga has as much to say about successful strategies and real-life warfare waged in our own time and place. Strategy Strikes Back brings together more than thirty of today’s top military and strategic experts, including generals, policy advisors, seasoned diplomats, counterinsurgency strategists, science fiction writers, war journalists, and ground-level military officers, to explain the strategy and the art of war by way of the Star Wars films.

Max Brooks is a writer, public speaker, and senior fellow at the Modern War Institute at West Point, and nonresident senior fellow at the Atlantic Council. He is the author of World War Z: An Oral History of the Zombie War and The Harlem Hellfighters, among other works. Brooks, and the other coeditors of this book, edited Strategy Strikes Back: How Star Wars Explains Modern Military Conflict (Potomac Books, 2018).

John Amble is the editorial director at the Modern War Institute and a military intelligence officer in the U.S. Army Reserve.

ML Cavanaugh is a senior fellow at the Modern War Institute and a U.S. Army strategist with global experience.

Jaym Gates is an acquiring editor for Nisaba Press and Falstaff Books, as well as a freelance editor and author.

Stanley McChrystal is a U.S. Army general (ret.) who led the Joint Special Operations Command in Iraq during the Persian Gulf wars and was top commander of American forces in Afghanistan.

“Over the course of history, our single greatest vulnerability has been a failure of imagination. Strategy Strikes Back confronts that vulnerability. The future may not evolve precisely as these authors suggest, but evolve it will. As it does, we will discover that some of tomorrow’s challenges will prove to be timeless, and others surprisingly new. Learning to imagine now will be time well spent.”—Gen. Martin Dempsey, former chairman of the Joint Chiefs of Staff

"This assortment of imaginative and fun analyses is an absolute essential for any military theorist, strategist, critic, and lover of the Star Wars saga that to this day, continues to inspire, expand, and hold a profound sway in our imaginations."—Christopher S. Poppleton, Aviation Digest

“Star Wars is just as much a foundational mythology of our time as The Iliad was a long time ago. Strategy Strikes Back ingeniously uses that world far, far away to help readers take a look at our wars here today.”—P. W. Singer, best-selling author of Wired for War and coauthor of Ghost Fleet: A Novel of the Next World War

"You might be forgiven for thinking the never-ending Star Wars franchise was simply a cash cow built of sequels, spin-offs and toys. But the space saga is actually helping further the discussion about military strategy right here on Earth."—Chad Jones, San Francisco Chronicle

"Anyone with a basic knowledge of the Star Wars universe is sure to enjoy the creative parallels used by these esteemed authors to simplify complex topics. Avid fans with deep knowledge of this universe cannot help but embrace these parallels, think through them more deeply, and dig even deeper into them as they try to support or argue against the authors while also showing off their superior knowledge of their favorite series of movies."—Steve Luczynski, Strategy Bridge

"Strategy Strikes Back succeeds . . . in illuminating the parallels between war-fighting in speculative fiction and the real world. It opens strategic thinking to non-expert audiences, and prompts experts to reason creatively about the role of force—and indeed the Force—in establishing and maintaining political order."—Stephen Dyson, H-Diplo

"Strategy Strikes Back highlights what good science fiction and serious reflection on pop culture can do: bring the (strategic) dilemmas of the current age into stark relief."—Erin Simpson, War on the Rocks

"This may be the most innovative and interesting book on military strategy ever published. . . . This volume takes a completely different approach to explaining both the eternal nature and modern intricacies of strategy, politics, and conflict by using the popular Star Wars movies as a common frame of reference for discussing the many issues and challenges modern practitioners of the strategic arts face."—Jerry Lenaburg, New York Journal of Books