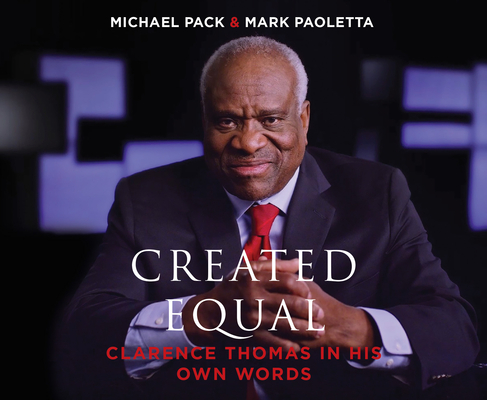 Drawing on historical documents and exclusive interviews, authors tell the inspiring story of Clarence Thomas's rise from a childhood of poverty and prejudice in the segregated South to Supreme Court Justice. Companion to blockbuster documentary Created Equal: Clarence Thomas in His Own Words, but a fascinating stand alone listen, as well!

*The full story behind the wildly successful documentary film, Created Equal: Clarence Thomas in His Own Words*

Born into dire poverty in the segregated South and abandoned by his father as a child, Justice Clarence Thomas triumphed over seemingly insurmountable odds to become one of the most influential justices on the Supreme Court. Yet after three decades of honorable service, few know him beyond his contentious confirmation and the surrounding media firestorm.

Who is Justice Clarence Thomas, in his own words?

In the follow-up to the wildly successful documentary by the same name, Created Equal builds on dozens of hours of groundbreaking, one-on-one interviews with Thomas to share a new, expanded account of his powerful story for the first time.

Producer Michael Pack and Mark Paoletta, a lawyer who worked alongside Thomas during his confirmation, dive deep into the Justice’s story. Drawing on a rich array of historical documents and unreleased conversations with Thomas, his wife, and those who knew him best, Created Equal is a timeless account of faith, race, power, and personal resilience.

Michael Pack is President of Manifold Productions, Inc. and the writer, director, and producer of numerous award-winning nationally broadcast documentaries. Pack served as the CEO of the U.S. Agency for Global Media under President Donald Trump, as the President and CEO of the Claremont Institute, and as the Senior Vice President for Television Programming at the Corporation for Public Broadcasting, among other distinguished positions.

Mark Paoletta served as general counsel to the Office of Management and Budget under President Trump from 2018 to 2021 and as chief counsel and assistant to Vice President Mike Pence from 2017 to 2018. A veteran lawyer, Paoletta specializes in representing clients in congressional investigations and is noted for his work on the confirmations of Justice Thomas, Gorsuch, and Kavanaugh.