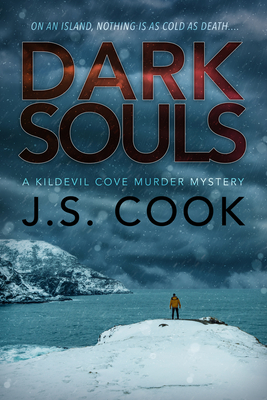 This is book number 4 in the Kildevil Cove Murder Mysteries series.

There’s trouble brewing in the cold waters of Kildevil Cove, and this time Danny Quirke may be hard put to stop it.

Due to his suspected association with his former boss’s human trafficking organization, Danny has been demoted and is no longer in charge. To make matters worse, he’s broken up with his partner, Tadhg... who may be in serious hot water himself. But then a faceless killer begins targeting Kildevil Cove’s most vulnerable, and Danny can’t refuse when his new boss asks him to take the case.

When Danny pulls a hypothermic young woman out of a small boat in the middle of a blizzard, she whispers a cryptic phrase about a man with no face. But who is he? What is his connection to the murders? And how is Danny going to solve the mystery while he’s the subject of an investigation that could end his career?

J.S. Cook grew up surrounded by the wild North Atlantic Ocean in a small fishing village on the coast of Newfoundland. An avid lover of both the sea and the outdoors, she was powerfully seduced by the lure of this rugged, untamed landscape. This love of her island heritage and its deeply Irish culture led her to create The Kildevil Cove Murder Mysteries series, police procedurals that feature career detective Deiniol Quirke and his partner, millionaire property developer Tadhg Heaney.

Her interest in police procedurals was recently reignited by an opportunity to work with a police profiler from the Los Angeles County Sheriff’s Department, editing two forensic field manuals to be used by LA County law enforcement and as part of the curriculum at the California Institute of Criminal Investigation. She maintains an avid interest in forensics and often designs and conducts her own forensic experiments, including a body farm in her backyard.

Reviewers have called her past work “… strong, solid detective fiction… with a depth and complexity of plot and characters….”

When she isn’t writing, J.S. Cook teaches communications and creative writing at the College of the North Atlantic. She makes her home in St. John’s with her husband Paul and her two furkids: Juniper, a border terrier, and Riley, a chiweenie.