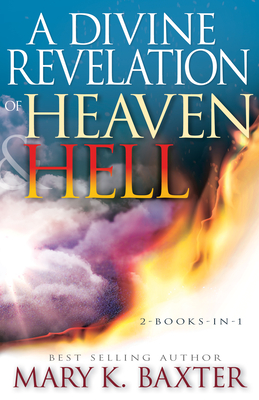 In A Divine Revelation of Heaven, after thirty nights in which God gave her visions of the depths of hell and the punishments of the lost, Mary K. Baxter was shown for ten nights the glories of heaven--the home of redeemed souls. Included in this book are her depictions of heaven's gates, angels, music, worship, storehouses of blessings, joyful heavenly citizens, four living creatures, and the brilliant throne of God. Mary also describes heaven's perfect order and purpose, what happens to children, and much more. These breathtaking glimpses of heaven, interspersed with applicable Bible verses, will turn your heart toward the beauty and joy that await every believer in Christ.

In A Divine Revelation of Hell, over a period of thirty nights, God gave Mary K. Baxter visions of hell and commissioned her to tell people still alive on earth to reject sin and evil, and to choose life in Christ. Here is an account of the place and beings of hell contrasted with the glories of heaven. Follow Mary in her supernatural journey as she enters with Jesus into a gateway to hell and encounters the sights, sounds, and smells of that dark place of torment, including its evil spirits, cells, pits, jaws, and heart. Be an eyewitness to the various punishments of lost souls and hear their shocking stories. This book is a reminder that each of us needs to accept the miracle of salvation before it is too late--and to intercede for those who do not yet know Christ. Time is running out.