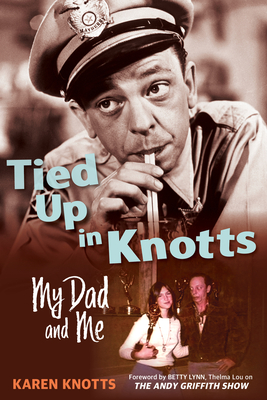 Much has been written about Don Knotts’s career, especially about his iconic role as Barney Fife on The Andy Griffith Show, but personal views into the man himself are few and far between. In Tied Up in Knotts, a loving daughter provides a full-life narrative of her father: Don’s difficult childhood in an abusive home, his escape into comedic performance, becoming a household name, his growth as a feature film actor, his failing health, and his family life throughout, leading to touching and hilarious moments that will make the reader laugh and cry.

Those looking for a behind-the-scenes peek at the show, from the nuts and bolts of production to the hilarious pranks and heartfelt moments between the cast and crew, will see it all through the eyes of the little girl who grew up on the set. Knotts will delight readers with the memories of celebrities touched by Don’s life, including Ron Howard, Tim Conway, Andy Griffith, Elinor Donahue, John Waters, Barbara Eden, Katt Williams, and Jim Carrey.

Tied Up In Knotts delves beyond Barney Fife nostalgia to tell the life story of a man and father.

Karen Knotts is an ADA-nominated stage actress and playwright who has been acting professionally since she was thirteen, including roles in Return to Mayberry, Archie Bunker's Place, One of Our Own, and the Vice Academy series. Knotts is also in demand as a panelist, emcee, and variety arts entertainer, including annual appearances at the Mayberry Days festival. She lives in North Hollywood, California. Betty Lynn played Barney Fife's long-suffering sweetheart, Thelma Lou, on The Andy Griffith Show.

"The cardinal rule for an actor to be a comedic hit on a sitcom or in the movies is 'Show me a man in trouble and I’ll show you a funny man.' Don Knotts personified that man in trouble with his brilliant acting skills whenever the light hit him, and he made it look effortless. I loved this book, and the millions he made laugh week in and week out will love it also." —Tom Dreesen

"A wonderful, deeply personal book of discovery and love, of appreciation and complexity, both honest and beautiful. Working with Don Knotts was a true gift, pure joy every moment!" —Joyce DeWitt, Three’s Company

"Tied Up in Knotts is a splendid Mayberry memoir. Karen Knotts tells the full, nuanced story of the man who created Barney Fife, the greatest sitcom sidekick in television history. Karen, a gifted performer herself, elegantly intertwines her own story and her father's, weaving in astute commentary from the likes of Jim Carrey and Ron Howard. A fascinating read." —Daniel de Visé, author of Andy and Don

"Don Knotts’s daughter Karen has captured the essence of her dad as only a daughter can. One of the great comedians of our time.  How lucky I was to cross paths with this kind and genuine man." —Beau Bridges

"Don Knotts has made such lasting impact—who didn’t grow up watching him?—that it’s easy to forget there was a person behind all those iconic characters. Karen Knotts’s memoir reveals the struggle before the success and the hard work behind the brilliance, a family-inside look at a brilliant actor and a complex man." —Dana Gould


"Since my father Tim Conway stole all his comedy from Don Knotts, it just seems honorable to continue the tradition and steal Tied Up in Knotts from the local bookstore." —Tim Conway Jr.

"Don Knotts knew how to be funny without trying. He could puff up his chest and look weaker. He could pretend to be angry and become laughable. Whatever he did, you reverse and read the opposite. He was truly a comic genius!" —Ed Asner


"Don Knotts was a dream to work with—funny, charismatic, charming, and always a consummate professional. His daughter Karen’s book provides a warm, up close, and personal account of the man who brought many, including myself, so much joy!" —Barbara Eden


"Don and I had fun together in a long-running show, Search for Tomorrow. It was a wonderful time." —Lee Grant

"Karen takes you back to the heartland of America from which Don and his values and insecurities sprang. It is a wonderful portrait of a simpler yet fraught time in our country’s history, and how a man with brilliance, talent, and drive made it into Hollywood history. I feel so lucky to have known the gentle humble Don, and the wild and crazy Mr. Furley, during the many years of Three’s Company." —Nancy Morgan Ritter


"In this memoir of Don Knotts's life written from her perspective as his daughter, Karen Knotts offers a loving portrait of a lovable man." —Barbara Feldon

"Karen Knotts’s memoir reveals the untold sides of Don and explores his creativity. I loved knowing him in Yarmy’s Army." —Peter Marshall

"Andy had to leave the set laughing because Don wouldn’t get out of character. Karen Knotts, his daughter, was there and tells all the funny stuff that happened behind the scenes on The Andy Griffith Show. I love this book!" —Gary Busey

"Legendary funnyman Don Knotts (1924-2006) receives a heartwarming tribute in this humorous and intimate debut by his daughter. . . Fans will be rapt." — Publishers Weekly