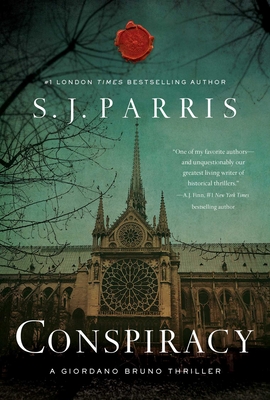 December 1585: King Henry III of France is the last of his line. He has appointed a Protestant as his successor, which has caused a three-way war in his country. As a result, the king is in mortal fear of a coup being orchestrated by the ultra-conservative Catholic League.

Radical philosopher, ex-monk and spy Giordano Bruno, forced to return to Paris, is called upon by King Henry to unearth the motivation behind several mysterious but linked deaths. Each victim is connected to a larger plot to manipulate the royal succession; what they knew and who killed them is a mystery to be solved.

Meanwhile, Bruno makes an uneasy alliance with Charles Paget, a key figure in the community of English Catholics who tried to assassinate Queen Elizabeth. When Bruno is implicated in the death of Leonie, a member of the Queen Mother's "Flying Squadron," he is forced to call on Paget and his connections for help—and finds that it comes with a price, involving an old enemy.

S. J. Parris is the pseudonym of Stephanie Merritt. Since graduating from Cambridge, she has worked as a critic for a variety of newspapers and magazines as well as for radio and television. She currently writes for the Guardian in London and is the author of five novels in the Giordano Bruno mystery series. Visit S. J. Parris at www.sjparris.com.

"Parris is, as always, adept at maintaining a fraught atmosphere, and effortlessly integrates the whodunit plot with the power politics of the time. This superior blend of religious schisms and murder should win Parris new fans."
— Publishers Weekly (starred)

“Excellent. This is historical mystery fiction at its finest.”
— Publishers Weekly (starred) [praise for the Giordano Bruno thrillers]

“A masterful work that deserves a place on all public-library historical-fiction shelves, and that should be recommended to Phillipa Gregory fans.”
— Booklist (starred) [praise for the Giordano Bruno thrillers]

“Hugely enjoyable. It’s played straight, but never humorlessly so, and there’s just enough 'proper' history amid the intrigue to keep purists on side.”
— Guardian [praise for the Giordano Bruno thrillers]

“One of my favorite authors, and she is unquestionably our greatest living writer of historical thrillers. Few novelists inhabit a setting—any setting—with such confidence and command; fewer still devise plots of such cunning and craft. If Hilary Mantel, John Le Carré, and Michael Connelly were to join forces, they might gift us with a novel as atmospheric, intelligent, and addictive as Treachery—or indeed any of Parris’s books featuring monk-turned-spy Giordano Bruno.”
— A. J. Finn, #1 NY Times bestselling author of The Woman in the Window [praise for Bruno thrillers]