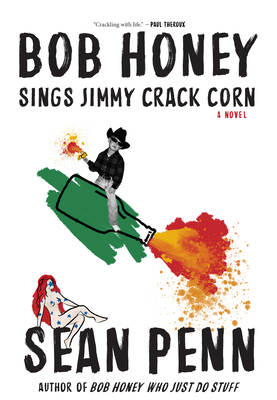 By Sean Penn
$26.00
Not Available In-Store - Usually Ships from Warehouse in 1-5 Days

Bob Honey Sings Jimmy Crack Corn--the madcap follow-up to his debut novel, which was hailed by authors as diverse as Salman Rushdie, Jane Smiley, and Paul Theroux --explores the deepest recesses of American politics and culture. Bob Honey, the disillusioned divorcee with a penchant for murder by mallet, weaves his way toward Washington DC for the ultimate showdown with a certain nefarious "landlord," but nothing is as it seems, and Bob will have more than just the government working against him. Part comedy and part thriller, Bob Honey Sings Jimmy Crack Corn establishes Sean Penn as a fixture of the literary landscape for years to come.

Sean Penn won the Academy Award for Best Actor for his performances in Mystic River and Milk, and received Academy Award nominations as Best Actor for Dead Man Walking, Sweet and Lowdown, and I Am Sam. He has worked as an actor, writer, producer, and director on over one hundred theater and film productions. His journalism has appeared in the San Francisco Chronicle, The Nation, and The Huffington Post.
My Account • Sign In • Sign Out • Register
NEW & USED BOOKS
AUTHOR EVENTS • GIFTS
Changing Hands Tempe
6428 S McClintock Dr, Tempe, AZ 85283
480.730.0205
[Google Map]
Mon-Fri: 10-9 | Sat: 9-9 | Sun: 10-6