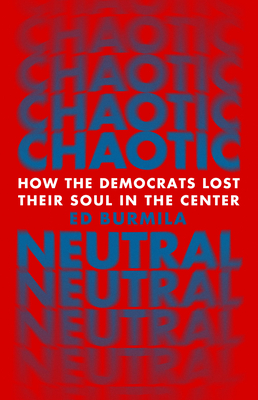 Why did the Democrats initially abandon their principles, and why haven’t they been able to grasp that they need a new strategy in the face of decades of diminishing returns? In Chaotic Neutral, political scientist Ed Burmila breaks it to us, tracing the party’s metamorphosis from bold defender of labor rights, civil rights, and a robust social safety net to a timorous, ideology-free, regulation-averse lifestyle brand.

Chaotic Neutral tracks the evolution (or devolution) of the Democratic Party from the New Deal era to Biden’s status-quo candidacy and the pandemic, when, even in the midst of a national crisis, the Democrats could not manage to pass sweeping progressive legislation. It is a timely analysis and, simultaneously, a timeless one that pinpoints why Dem politicians act like also-rans even when they’re in power.

Burmila doesn’t pull any punches as he describes the Democrats’ brand of futility politics, but he also doesn’t claim that all is futile, instead laying out a potent strategy for how the party might abandon its lesser-of-two-evils strategy and shift back into drive.

Ed Burmila has taught and written on American politics for two decades. He holds a PhD in political science, spent ten years as a professor, is a veteran blogger and podcaster, has published original research in several academic journals, and has contributed to popular outlets such as The Nation and the Washington Post. His heart lives in Chicago; the rest of him lives in North Carolina with his wife, Cathy, and two dogs.

“Chaotic Neutral is a thorough account of how the Democrats went from America’s only viable party to everybody’s favorite punching bag. Liberals need to read this book and weep.”

“An incisive and propulsive dissection of what ails the Democratic Party. This book is a rousing argument for much-delayed political change.”

“Urgent, engaging reading for anyone trying to make sense of contemporary US party politics. A fun read for decidedly un-fun times.”

“Chaotic Neutral exposes the rot at the foundation of the current Democratic Party with an immensely readable mixture of political and social history, analysis, and humor. While acknowledging that there are no quick fixes or easy paths forward, Burmila also thankfully highlights the fundamental shifts necessary to reorient, rebuild, and ultimately reconnect the party to the people it purports to represent.”

“This irreverent polemic debut alleges that Democrats ‘give up when they should fight’ and have a ‘broken’ view of how politics works… Throughout, Burmila combines deep research and sophisticated history lessons with acerbic wit (Donald Trump is ‘a store-brand dictator, the perfect synthesis of Kim Jong-Il and Don Rickles’). This smart and entertaining screed packs a punch.”—Publishers Weekly

“Burmila writes…with wit and a real talent for making connections throughout history in a way that’s easy for readers to both follow and swallow, bitter though it may be.”—The Progressive Populist

“‘Chaotic Neutral’ provides a well-written history of how we got to this point, and I found Burmila’s tone at times LOL funny. (I highly recommend reading the notes at the bottom of the pages.)”—Real Change

“It is a timely analysis and, simultaneously, a timeless one that pinpoints why Dem politicians act like also-rans even when they’re in power.”—WRAL