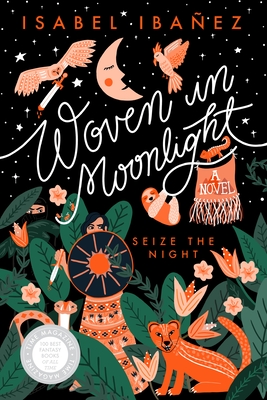 A lush tapestry of magic, romance, and revolución, drawing inspiration from Bolivian politics and history.

Ximena is the decoy Condesa, a stand-in for the last remaining Illustrian royal. Her people lost everything when the usurper, Atoc, used an ancient relic to summon ghosts and drive the Illustrians from La Ciudad. Now Ximena’s motivated by her insatiable thirst for revenge, and her rare ability to spin thread from moonlight.

When Atoc demands the real Condesa’s hand in marriage, it’s Ximena’s duty to go in her stead. She relishes the chance, as Illustrian spies have reported that Atoc’s no longer carrying his deadly relic. If Ximena can find it, she can return the true aristócrata to their rightful place.

She hunts for the relic, using her weaving ability to hide messages in tapestries for the resistance. But when a masked vigilante, a warm-hearted princesa, and a thoughtful healer challenge Ximena, her mission becomes more complicated. There could be a way to overthrow the usurper without starting another war, but only if Ximena turns her back on revenge—and her Condesa.

Isabel Ibañez is the author of Woven in Moonlight (Page Street), a finalist for the William C. Morris Award, and is listed among Time Magazine’s 100 Best Fantasy Books Of All Time. She was born in Boca Raton, Florida, and is the proud daughter of two Bolivian immigrants. Isabel has a profound appreciation for history and traveling and loves hosting family and friends around the dinner table. She currently lives in Asheville, North Carolina, with her husband, their adorable dog, and a serious collection of books. Say hi on social media at @IsabelWriter09.