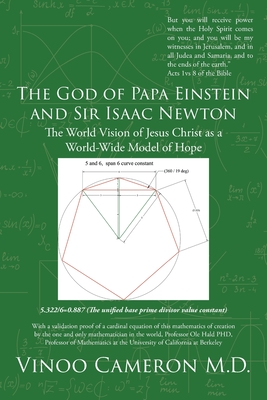 God is one, nameless and formless, and as in the Bible (and other scriptures), God is "I am." God is the creator, the alpha and the omega. This book has taken the mother of all science--Mathematics--and hurled it into the face of arrogant scientists like Albert Einstein and Charles Darwin and proved by mathematics, that is prompted by the persona of Jesus Christ, that the imprint of creation from its "alpha to its omega", is a mark on all science and all the universe, and its black holes, galaxies, etc. The book has taken the language of science itself and shown by mathematics that current science lacks the fundamental understanding of the created unified theorem at -1 off infinity. To the author, Einstein's presumption are an affront, as he questions God "if he plays dice or not" or that "when he sits with God he would like to ask God what else he needs to know to explain his theory". All mankind are all created -1 from God, and thus are equal in dignity. This book will open a door to a new understanding of science as a unified theorem of creation at -1, for it is only then we can bring hope to this condemned world and all its science. By the dictum of Eden as in the book of Genesis in the Bible, "All knowledge is hidden from man to be revealed through perspiration of the sweat of man's brow."