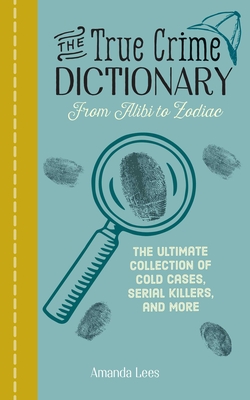 Immerse yourself in the fascinating world of criminology with the one and only True Crime Dictionary. Containing everything from police jargon and forensics terms to deadly poisons and even deadlier killers, this book is sure to enthrall every true-crime lover! Whether you are a writer, podcast-listener, documentary-watcher, or just a fan of true crime stories, you’ll get an in-depth look at familiar terms as well as new and fascinating ones like:


A perfect gift for any murderino, true crime junkie, or connoisseur of macabre trivia, this is the ultimate book for lovers of all things murder.

Amanda Lees was born in Hong Kong. She is the author of the best-selling satirical novels Selling Out and Secret Admirer (Pan), which have both received critical acclaim and have been translated into several languages. Her major YA thriller trilogy, Kumari, Goddess of Gotham, was nominated for the Guardian Children’s Book Prize and the Doncaster Book Award. It also featured as Redhouse Book of the Month and LoveReading4Kids Book of the Month. Amanda appears regularly on BBC radio and LBC and was a contracted writer to the hit series Weekending on Radio 4. She has written for, or contributed to, the Evening Standard, the Times, New Woman, US Cosmopolitan, and Bulgaria’s Vagabond magazine.