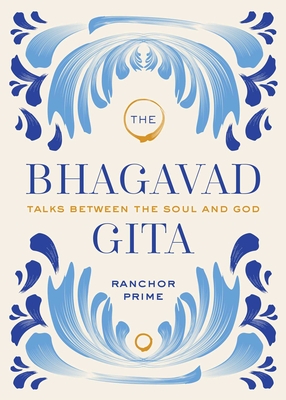 The Bhagavad Gita, a wisdom classic from India, was written down 3,000 years ago from an even older oral tradition. It has been translated from the original Sanskrit into over 75 languages worldwide, and into English in more than 300 editions. Ranchor Prime, an author of several books on Indian philosophy and culture, has translated this edition into English as one of the most accessible versions for the general public, especially those interested in the deeper meaning of the Yoga tradition as a time-tested self help guide.

The Bhagavad Gita is one of a small number of revered wisdom texts that transcend their faith traditions, such as the Bible, the Qur’an and the Dao De Ching. Einstein, Emerson, Thoreau, Jung, and others have celebrated the Bhagavad Gita as a book of profound teachings that apply to the human problems of our contemporary world as much as they did at the Gita’s inception over 3,000 years ago.

The Bhagavad Gita (along with the Yoga Sutras) is also one of the two primary books that delineate the original Yoga teachings of India. It is used by many yoga teachers in their training programs worldwide.

Ranchor Prime, an English (UK) author, broadcaster, and ecological activist, initially wrote this edition for his children, but it is far from a childish book. Rather, he has created a version of this classic that is accessible to an adult Western audience in a way that few of the hundreds of editions translated from the original Sanskrit have been.

At its heart, the Gita deals with the mysteries of life: the nature of the Self, the Universe/Higher Power, and the World.  Spoken on a battlefield, it is a conversation between the soul and an Avatar, a Divine Being. Ranchor Prime's version is distinguished by his nonsectarian approach, making the Gita relevant to those of all religions or none and emphasizing the link between spirituality and self-development.

The section-by-section commentary opens the text to the spiritual seeker. Prime never loses sight of the audience for his book, and of the fact that he wants his readers to understand the Gita in a personal way.

Anyone who has ever asked, “What is the purpose of life?”, “Who am I?”, or “How do I find peace of mind?” will find something of value in this book. Here is an invitation to discover the essential wisdom of yoga for today’s world.

Ranchor Prime is the author of several books on the culture and spirituality of India, speaking to Hindu environmental issues as a Hindu religious scholar. He is an advisor on religion and conservation to the Alliance of Religions and Conservation, and he is co-founder and director of Friends of Vrindavan, an environmental charity aimed at protecting sacred forests in India. He lives in London.