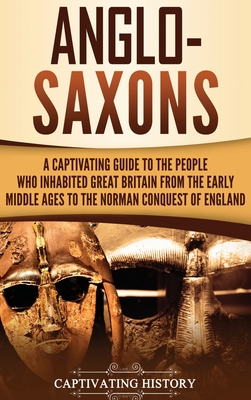 If you want to discover the captivating history of the Anglo-Saxons, then keep reading...

There was a time before England was united. This was a time before William the Bastard decided to prove to his contemporaries that his bastard moniker would be erased with a swift conquest of the biggest island northwest of Europe. A time before the Battle of Hastings and the year 1066. A time when many petty kingdoms ruled, conquered, and were liberated, time and time again, by a specific people group. A people group that is, in fact, a blend of many and that authors of later dates would collectively call the Anglo-Saxons.

With this book, we want to let our readers know how vibrant and lively (as well as deadly) life in Britain was during the perhaps wrongly-titled "Dark Ages." With the end of the Roman Empire, the local Britons were left to their devices, and it would be several people groups from a peninsula in Central Europe that would come to dominate the island, making sure their presence was known through a series of kingdoms, battles, clashes, victories, and defeats.

But the Anglo-Saxons have a lot more to offer us history buffs. We can learn about their day-to-day life: how they dressed, what they ate and drank, how they waged war or had fun, how they buried their dead, and how they worshiped their gods. We can also learn about their art, their amazing metal and clay pieces, stunning bits of tapestries, and dozens of well-illuminated manuscripts. And if we lack any information on what they thought of the world around them, we can be happy that they were willing to tell us that themselves, all through hundreds of written texts of both religious and secular nature.

The Anglo-Saxons were, indeed, an odd group of people to take control of Britain. But they didn't do it all at once, and just like any other people in history, they had a period of adjustment, growth, reconstruction, and eventual rise to prominence.

In Anglo-Saxons: A Captivating Guide to the People Who Inhabited Great Britain from the Early Middle Ages to the Norman Conquest of England, you will discover topics such as

So if you want to learn more about the history of the Anglo-Saxons, scroll up and click the "add to cart" button