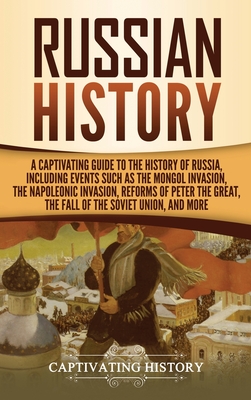 Discover the Captivating History of Russia

Russia, or the Russian Federation as it is officially known, is the world's largest country and covers almost a sixth of the global landmass. The country is often associated with harsh climates and autocratic government. The shadow of communism and the Cold War continues to influence global attitudes towards Russia.

This new captivating history book serves as an overview of Russian history over the span of more than a millennium, from the foundation of the Russian state by the Viking prince Rurik in 862 AD until the collapse of the Soviet Union at the end of 1991.

In Russian History: A Captivating Guide to the History of Russia, Including Events Such as the Mongol Invasion, the Napoleonic Invasion, Reforms of Peter the Great, the Fall of the Soviet Union, and More, you will discover topics such as

So if you want to discover more about the startling history of Russia, click "add to cart"