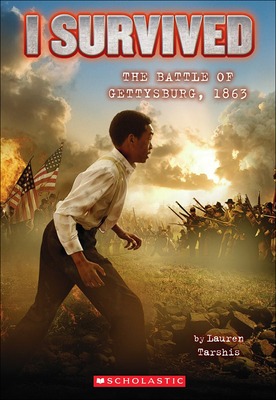 This is book number 7 in the I Survived series.

The bloodiest battle in American history is under way . . .
It's 1863, and Thomas and his little sister, Birdie, have fled the farm where they were born and raised as slaves. Following the North Star, looking for freedom, they soon cross paths with a Union soldier. Everything changes: Corporal Henry Green brings Thomas and Birdie back to his regiment, and suddenly it feels like they've found a new home. Best of all, they don't have to find their way north alone-they're marching with the army.
But then orders come through: The men are called to battle in Pennsylvania. Thomas has made it so far . . . but does he have what it takes to survive Gettysburg?

Lauren Tarshis is the editor of Scholastic's Storyworks magazine and group editorial director for language arts for Scholastic classroom magazines, in addition to being the author of the I Survived series and the critically acclaimed novels Emma-Jean Lazarus Fell Out of a Tree and Emma-Jean Lazarus Fell in Love. She lives in Westport, Connecticut, and can be found online at www.laurentarshis.com.