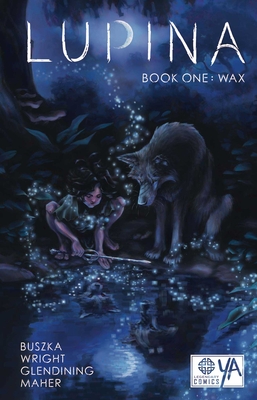 In the coastal town of Kote, recently brought under the yoke of the Addalian Empire, four-year-old Lupa spends her days getting bullied by her older sister and hiding behind her mother's skirts. But when tragedy strikes, Lupa finds herself alone in a new world... alone until she's found by the she-wolf, Coras, and sets off on a journey of discovery... and revenge.

James F. Wright is a Los Angeles-based writer, reader, and ramen eater. He's been writing comics for a while now, and been reading them for as long as he can remember. James is the co-creator, with Li Buszka, of Legendary Comics' girl-raised-by-a-wolf fable, Lupina. In 2018 he and artist Josh Eckert were nominated for an Eisner and PRISM Award for their self-published one-shot queer, sci-fi romance short, Contact High. That same year, he and artist Rashad Doucet contributed the sci-fi short, "Thrustfall," to Ascend Press's Eisner and Ignatz Award-winning anthology, Elements: Fire, edited by Taneka Stotts and Shing-Yin Khor. In 2020, James and Jackie Crofts completed their five-volume culinary coming-of-age crime saga, Nutmeg. His work has also appeared in the Iron Circus Comix anthologies FTL, Y'all (with Teo DuVall), and You Died (with Jackie Crofts). When he's not writing comics, he enjoys cooking, baking, and going to the movies (when it's safe to do so)

Li Buszka (they/them) is a queer illustrator, comic artist, and courtroom sketch artist based in Indianapolis. Li has contributed art to anthologies Comic Book Slumber Party: Escape From Bitch Mountain and Mine!: a Comics Collaboration to Benefit Planned Parenthood.

"With Lupina, Wright and Buszka have created something both accessible and absolutely unique. An immersive folkloric fable that pushes the boundaries of what sequential storytelling can be, while telling a truly human story."


— Rosie Knight, writer of The Haunted High-Tops and Godzilla Rivals: Vs. Battra