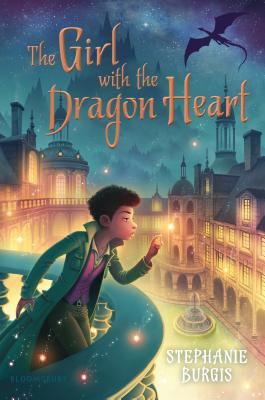 By Stephanie Burgis
$16.99
Not Available In-Store - Usually Ships from Warehouse in 1-5 Days

A chocolate-filled, girl-powered fantasy with a witty heroine who learns what home truly means, perfect for fans of Shannon Hale.

"Will satisfy readers who hunger for feel-good tales that pack a girl-power punch, like Gail Carson Levine’s Ella Enchanted or the movie Moana." --School Library Journal on The Dragon with a Chocolate Heart

Silke has always been good at spinning the truth and storytelling. So good that, just years after arriving in the kingdom as a penniless orphan, she has found her way to working for the most splendid chocolate makers in the city as a master promoter. Although Silke loves her work at the Chocolate Heart, she’s certain it’s not going to last, and what Silke wants more than anything is somewhere to call home--somewhere safe. But when your best friend is a dragon-turned-hot-tempered-girl, trouble is always right around the corner.

Then Silke gets the opportunity she’s been waiting for: the Crown Princess personally asks her to spy on the Elfenwald royal family during their first visit to the kingdom. In return, Silke will have the home she’s always wanted in the secure palace. But Silke has her own dark, secret reasons for not trusting fairies . . . and her mission isn’t as simple as she hoped. Soon, she discovers that her city is in danger--and that maybe it’s more her home than she ever realized.

Can Silke find out the truth about the fairies while keeping her own secrets hidden?

A Mighty Girl Best Book of the Year

Stephanie Burgis grew up in East Lansing, Michigan, but now lives in Wales with her husband and two sons, surrounded by mountains, castles and coffee shops. She is the author of The Dragon with the Chocolate Heart, the tween fantasy trilogy, Kat, Incorrigible and the forthcoming historical fantasy adult title, Masks and Shadows.
www.stephanieburgis.com
@stephanieburgis

“Full of secrets and supernatural beings and topped with chocolate, the book hooks fans of fantasy with a fast-paced adventure that gradually reveals its mysteries.” —BCCB

“Black-presenting Silke's an entirely believable character; supporting characters are equally well-drawn, and Burgis' world is a robustly diverse one. As with the first book, the fantasy hijinks are tempered with depth for a story that's sweet but not saccharine.” —Kirkus Reviews, starred review

“Thirteen-year-old Silke is the heroine of her own story . . . The true star of this show is independent girlhood. Silke, Aventurine, and the princess Sophia's freedom comes through recognizing that they are powerful not where they fit in, but in the ways that they stand out.” —Starred review, Foreword Reviews

“Full of adventure . . . for fans of Tamora Pierce and Gail Carson Levine, or anyone looking for a book which features strong women who save the day.” —School Library Journal

“Chocolate and dragons, together at last! Like sipping hot cocoa on a cold day, reading this book was an absolute delight. And by the end I felt like a dragon sitting on a pile of gold, knowing I'd found a treasure. Readers of all ages will love this deliciously charming adventure and its feisty dragon-transformed-into-a-girl main character, Aventurine!” —Sheila Grau, author of the Dr. Critchlore's School for Minions series on THE DRAGON WITH A CHOCOLATE HEART

“In The Dragon with a Chocolate Heart, Aventurine is turned into a girl, but inside she remains ALL dragon, every fierce, lovable inch of her. This story is a delightfully delicious blend of magic spiced with adventure and a heart as sweet and warm as molten chocolate. I completely adored this book!” —Sarah Prineas, author of THE MAGIC THIEF and Winterling series on THE DRAGON WITH A CHOCOLATE HEART

“A gloriously fresh story to be read with a steaming cup of chocolate at hand.” —Starred review, Kirkus Reviews on THE DRAGON WITH A CHOCOLATE HEART

“Aventurine's fiery spirit is immediately endearing, and a diverse cast of fully realized supporting characters fill out a fantasy world that readers will love to inhabit. Pair with chocolate for maximum enjoyment . . . will satisfy readers who hunger for feel-good tales that pack a girl-power punch, like Gail Carson Levine's Ella Enchanted or the movie Moana.” —School Library Journal on THE DRAGON WITH A CHOCOLATE HEART

“Burgis creates a feisty protagonist with a temper that suits her dragon heritage. . . . Readers will be rooting for Adventurine throughout this well-paced, colorful narrative. An appealing chapter book for young fantasy fans.” —Booklist on THE DRAGON WITH A CHOCOLATE HEART