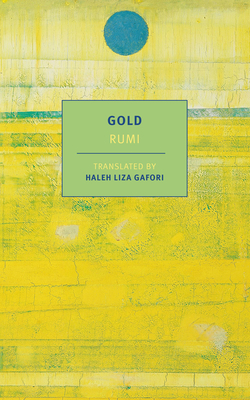 A vibrant selection of poems by the great Persian mystic with groundbreaking translations by an American poet of Persian descent.

Rumi’s poems were meant to induce a sense of ecstatic illumination and liberation in his audience, bringing its members to a condition of serenity, compassion, and oneness with the divine. They remain masterpieces of world literature to which readers in many languages continually return for inspiration and succor, as wellas aesthetic delight. This new translation by Haleh Liza Gafori preserves the intelligence and the drama of the poems, which are as full of individual character as they are of visionary wisdom.

Marilyn Hacker praises Gafori’s new translations of Rumi as “the work of someone who is at once an acute and enamored reader of the original Farsi text, a dedicated miner of context and backstory, and, best of all, a marvelous poet in English.”

Rumi, Molana, Jalāl ad-Dīn Mohammad Balkhy (1207–1273), was born in or near the city of Balkh, in present-day Afghanistan. Considered the greatest poet of the Persian language, Rumi’s major works are the Masnavi, a six-volume collection of mystical teachings in rhyming couplets, and the Divan-e Shams-e Tabrizi, a collection of lyric poetry dedicated to his spiritual mentor. He died and was buried in Konya.

Haleh Liza Gafori is a poet, translator, and musician of Persian descent born in New York City. Her poems have been published by Columbia University Press and Rattapallax. As a vocalist, she has performed at events such as David Byrne’s One Note at Carnegie Hall and Bonnaroo. She teaches workshops on Rumi’s poetry at universities and festivals across the country.

"Magnetic in his eloquent reverence and his soulful intelligence. . . .Having mastered the mathematical musicality of the quatrain, he became a virtuoso of the ghazal with its series of couplets, each invoking a different poetic image, each crowned with the same refrain—a kind of kinetic sculpture of surprise, rapturous with rhythm." —Maria Popova, The Marginalian “Best Books of the Year”

“Haleh Liza Gatori’s ecstatic and piercing translation has lifted a veil, bringing Rumi closer into the quick of our present. Each poem is a divine invitation. Free your mind. Drown in love.” —V (formerly Eve Ensler)

”Haleh Liza Gafori’s translations of Rumi are exquisite. Gorgeous, fluent, faithful translations, rendering Rumi’s voice on the page with an original integrity that is as skilled as it is unforgettable." —Pádraig Ó Tuama, host of On Being’s Poetry Unbound

“Rumi, ancient and eternal. Magnetic in his eloquent devotion and his soulful intelligence. Majestic in his whirling silk robe and his defiant disdain for his culture’s worship of status. Volcanic with poetry. . . . A dazzling selection of his poetry, including some never previously alive in English, appears in Gold, newly translated and inspirited by poet and musician Haleh Liza Gafori.” —Maria Popova

“Haleh Liza Gafori’s Gold is everything Rumi was himself—sacred, profane, laugh out loud funny, deeply earnest, demotic, and yes, Persian. There’s a rich fluency here not just in idiom but in gesture, in spirit. It’s uncanny to encounter eight-hundred-year-old verse this urgent: 'Misers rule. Generosity fades from memory,' Rumi writes. Still, 'Your eyes see. Your heart is full.' Gafori’s Rumi teaches me how to wander into mystery—“humble as soil”—without galloping toward some hasty and inorganic conclusion: 'A barren moon shines. A sour world smiles. What do I know but the light shining down?' What a gift this is, what gold.” —Kaveh Akbar, Poetry Editor at The Nation

“I have been longing for this gorgeous book, this specific translation of Rumi’s poems my whole life. As Rumi says in one of the book's poems, 'Wherever the soul soared/Fire was there first.' Haleh Liza Gafori has taken Rumi’s original Farsi text and unleashed its fire. My soul soars reading each poem. She has given us a great and graceful gift.” —Elizabeth Lesser

"Translating a 13th-century Persian poet whose work is deeply rooted in Islamic theology and Qur’anic language, infused with mystical vision, and laced with heretical imagery, is not a project for the faint of heart. Many of Rumi’s recent English translators or ‘para-translators,’ have no knowledge of Persian, the work’s cultural context, or Islam. Many speakers of modern Persian lack the literary gifts to craft English poems of equivalent power. Despite all this, the core luminosity of Rumi’s work has shone through. It gives me great pleasure, and relief, to say that I think Haleh Liza Gafori’s translations are the closest an English translator has come to bringing it all together. . . . Gold is a perfect introduction to the illuminations in Rumi’s work, or an important addition to your Rumi bookshelf." —Elizabeth T. Gray, Jr., Hyperallergic

“These are the Rumi translations we’ve been waiting for! In Gold, translated by Persian- American poet/singer Haleh Liza Gafori, meanings and images hurtle us towards love and ecstasy, just as Rumi intended. You won’t read these words so much as dance with them. Hang on tight as they begin whirling. Unbuckle your seat belt as they take flight. Pure Gold!” —Bob Holman

“Haleh Liza Gafori’s translations are the work of someone who is at once an acute and enamored reader of the original Farsi text, a dedicated miner of context and backstory, and, best of all, a marvelous poet in English.” —Marilyn Hacker, Academy of American Poets Chancellor 2008-2014

“Gold selects not from that sober, mature work but from the lyric reveries of Rumi’s metamorphosis, the fruit of altered states. . . . Rhythmic, intuitive arrangements revive the conditions in which this poetry came into being. . . . Far from new-age quietism, these poems urge the heart to be alert, amazed, to meet the ‘sour world’ awake.” —4Columns

“In clear, shimmering language, neither simplified nor obscurantist, Gafori renders the ecstatic core of Rumi’s vision in an American idiom that both honors the Islamic background of the poems and insists that what we mean by ‘surrender’ cannot be delimited by any psychology or religious tradition.” - Leonard Schwartz, author of The New Babel: Towards a Poetics of the Mid-East Crises
“Whether you wolf it down in a single exuberant sitting like we did or parcel these poems out, one a day over 80 days, you can’t help but be caught up with what I think we can all agree by this point are timeless sentiments. . . We got an almighty kick out of Haleh Liza Gafori’s translation and reckon you will too.” —Bookmunch