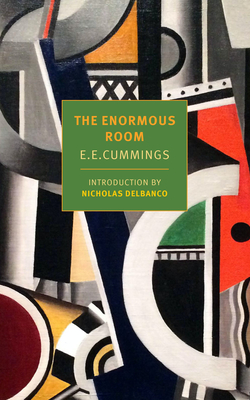 A centenary edition of E. E. Cummings's antic autobiographical novel about his imprisonment in a French military detention camp during World War I.

In 1917, after the entry of America into World War I, E. E. Cummings, a recent graduate of Harvard College, volunteered to serve on an ambulance corps in France. He arrived in Paris with a new friend, William Slater Brown, and they set about living it up in the big city before heading off to their assignment. Once in the field, they wrote irreverent letters about their experiences, which attracted the attention of the censors and ultimately led to their arrest. They were held for months in a military detention camp, sharing a single large room with a host of fellow detainees. It is this experience that Cummings relates in lightly fictionalized form in The Enormous Room, a book in which a tale of woe becomes an occasion of exuberant mischief. A free-spirited novel that displays the same formal swagger as his poems, a stinging denunciation of the stupidity of military authority, and a precursor to later books like Catch-22 and MASH, Cummings’s novel is an audacious, uninhibited, lyrical, and lasting contribution to American literature.

E. E. Cummings (1894–1962) was born in Cambridge, Massachusetts, to prominent Unitarian parents whose circle of friends included Josiah Royce and William James. After earning his master’s degree from Harvard in 1916, Cummings enlisted in the Norton-Harjes Ambulance Corps and was arrested by the French military on suspicion of espionage because of antiwar sentiments expressed in his letters home. Two months later, after his father wrote a letter to Woodrow Wilson, Cummings was set free and returned to the United States, where he was drafted into the army and served on a base in Massachusetts until the end of the war. The Enormous Room, based on his experience as a prisoner, appeared in 1922, a year before his first book of poetry, Tulips and Chimneys.

Nicholas Delbanco is the author of more than thirty books of fiction and nonfiction, including, most recently, Why Writing Matters, the essay collection Curiouser and Curiouser, and the novel It Is Enough. He is the Robert Frost Distinguished University Professor Emeritus of English Language and Literature at the University of Michigan. He lives in New York City and Cape Cod.

"The canonical works of the First World War are most frequently concerned with the squandered lives of young men, yet Cummings’s report invaluably expands the reader’s grasp of the catastrophe. . . . The Enormous Room was originally published before Cummings’s debut collection of poems. . . and exhibits much of the fragmentary style and lively spirit for which his poetry would become known. Yet beneath these flourishes lies a sincere and biting critique of those responsible for the conflict, which rings as true now, in the book’s centenary year, as it did then." —Kathleen Rooney, The TLS

“The Enormous Room is a good book, an unusual book, an exciting book.” —Robert Graves

“I went through The Enormous Room again . . . and from it knew, more keenly than from my own senses, the tang of herded men, and their smell. The reading is as sharp as being in prison, for all but that crazed drumming against the door which comes of solitary confinement.” —T. E. Lawrence

“The Enormous Room lives on, because those few who cause books to live have not been able to endure the thought of its mortality.” —F. Scott Fitzgerald