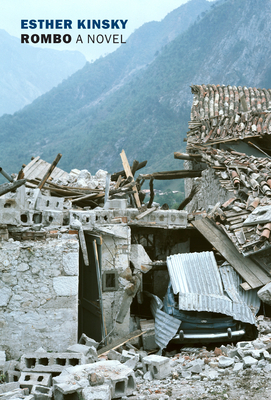 Seven survivors of the 1976 Friuli earthquake in northeastern Italy, which left hundreds dead and thousands unhoused, speak of their lives after the catastrophe in this poignant, propulsive work of fiction by a noted poet, translator, and novelist.

In May and September 1976, two severe earthquakes ripped through northeastern Italy, causing severe damage to the landscape and its population. About a thousand people died under the rubble, tens of thousands were left without shelter, and many ended up leaving their homes in Friuli forever.

The displacement of material as a result of the earthquakes was enormous. New terrain was formed that reflects the force of the catastrophe and captures the fundamentals of natural history. But it is far more difficult to find expression for the human trauma, the experience of an abruptly shattered existence.

In Esther Kinsky’s novel Rombo, seven inhabitants of a remote mountain village discuss their lives, which have been deeply impacted by the earthquake that has left marks they are slowly learning to name. From the shared experience of fear and loss, the threads of individual memory soon unravel and become haunting and moving narratives of a deep trauma.

Esther Kinsky is the author of six volumes of poetry and four novels, most recently Grove, which won the 2018 Leipzig Book Fair Prize. A prolific translator, Kinsky has translated many notable English and Polish writers into German, including John Clare, Henry David Thoreau, and Olga Tokarczuk. Her novel River was longlisted for the German Book Prize in 2014.

Caroline Schmidt has translated poetry by Friederike Mayröcker, as well as art historical essays, museum catalogues, and exhibition texts for Albertina in Vienna and Pinakothek der Moderne in Munich, among others. She lives in Berlin.