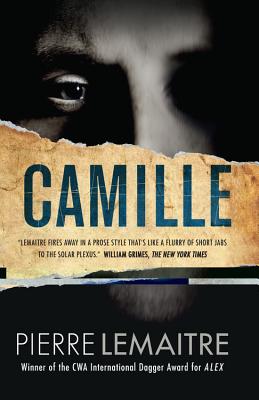 By Pierre Lemaitre
$16.99
Not Available In-Store - Usually Ships from Warehouse in 1-5 Days

This is book number 3 in the The Commandant Camille Verhoeven Trilogy series.

In his acclaimed, award-winning novels Alex and Irène, Pierre Lemaitre created an unforgettable character in Police Commandant Camille Verhoeven. Now, in Camille, the final volume in Lemaitre's internationally bestselling trilogy of "meta-meta detective" novels (The New York Times), Verhoeven faces his most harrowing case yet, and the ultimate reckoning for the diminutive yet tenacious protagonist.
Anne Forestier finds herself in the wrong place at the wrong time when she is trapped in the middle of a bank robbery. Shot three times, she is lucky to survive-and morbidly unlucky to remember the face of her assailant.
Followed home from her hospital bed, Anne is in grave danger. But one thing stands in her favor-a dangerously vengeful partner, carrying the scars of devastating loss, who will break all the rules to protect the woman he loves: Commandant Camille Verhoeven.
Following the horror of Irène and the thrills of Alex, Camille is the heart-stopping final chapter. Drawn once again into a labyrinthine web with answers ever out of reach, Camille must draw on all his talent to face an enemy who threatens everything he holds dear.

Pierre Lemaitre has worked for many years as a teacher of literature. His novels to date have earned him exceptional critical and public acclaim as a master of the crime novel and have won him the Prix du Premier Roman de Cognac 2006, the Prix du Meilleur Polar Francophone 2009, and the Prix du Polar European du Point 2010. Alex is his first novel to be translated into English, and won the prestigious 2013 Crime Writers Association International Dagger Award. In 2013 Lemaitre was the recipient of the prestigious Prix Goncourt, the highest literary honor in France, for Au Revoir La-Haut.

Winner of the CWA International Dagger Award!
"[The] stunning final volume of Lemaitre's Commandant Camille Verhoeven trilogy . . . The author won the CWA International Dagger Award for 2013's Alex, the first book in the trilogy to be published in the U.S., and this gut-wrenching entry may well garner similar honors."—Publishers Weekly (Starred Review)

"Verhoeven remains a laser-focused detective who is relentless in doing whatever it takes to impose just a sliver of justice in a consistently unjust world. A bittersweet conclusion to this ferociously intense series."
—Booklist

"Another winner from Pierre Lemaitre, a French master . . . The kind of book that will keep you up late simply because you cannot bear to desert these poor people in their hour of need . . . This trilogy has a complex architecture of cause and effect, sin and retribution all its own. Trust Lemaitre: he knows what he is doing."
—Sydney Morning Herald

"Lemaitre is a beautiful writer."—Crime Pieces

"If you like fast-paced crime fiction, this book is definitely for you. Each twist of the plot hits you like a jarring jolt to the heart, and each hit of the hammer pushes that nail in until the very end, when the nail finally goes out the other side. The ending will leave you craving more, but thankfully, Lemaitre gives us time to catch our breath! This tale of vengeance and romance and some of the sickest criminals around will have your heart pounding."—Killer Nashville
My Account • Sign In • Sign Out • Register
NEW & USED BOOKS
AUTHOR EVENTS • GIFTS
Changing Hands Tempe
6428 S McClintock Dr, Tempe, AZ 85283
480.730.0205
[Google Map]
Mon-Fri: 10-9 | Sat: 9-9 | Sun: 10-6