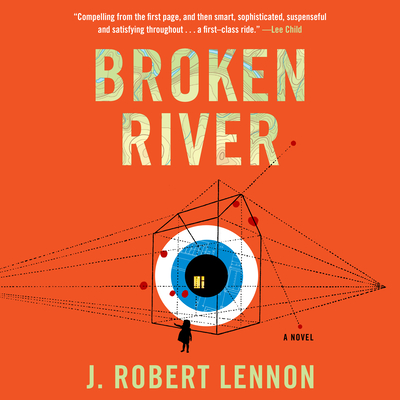 By J. Robert Lennon, Hillary Huber (Narrated by)
Email or call for price
Out of Print

“Imagine a sentence that has the slow-burn intensity you feel when reading your favorite mystery novels and the nuance and music of your icons of prose style. Now imagine a whole book of them. Set that book in a small town in Upstate New York, move a family of city folk into a Shirley Jacksonian home, and tell part of the story from the point of view of an 'Observer' who could represent the reader, the author, a house spirit, God, or something else entirely. Now cede your imagination to J. Robert Lennon, whose new novel will transport and move you. A perfect union of breezy and deep, Broken River has something for everyone.”
— John Francisconi, Bank Square Books, Mystic, CT

Karl, Eleanor, and their daughter, Irina, arrive from New York City in the wake of Karl's infidelity to start anew. Karl tries to stabilize his flailing art career. Eleanor, a successful commercial novelist, eagerly pivots in a new creative direction. Meanwhile, twelve-year-old Irina becomes obsessed with the brutal murders that occurred in the house years earlier. And, secretly, so does her mother. As the ensemble cast grows to include Louis, a hapless salesman in a carpet warehouse who is haunted by his past, and Sam, a young woman newly reunited with her jailbird brother, the seemingly unrelated crime that opened the story becomes ominously relevant. Hovering over all this activity looms a gradually awakening narrative consciousness that watches these characters lie to themselves and each other, unleashing forces that none of them could have anticipated and that put them in mortal danger. Broken River is a cinematic, darkly comic, and sui generis psychological thriller that could only have been written by J. Robert Lennon.
My Account • Sign In • Sign Out • Register
NEW & USED BOOKS
AUTHOR EVENTS • GIFTS
Tempe
6428 South McClintock Drive
480.730.0205
[Google Map]
Sunday-Friday 10am-8pm
Saturday 9am-8pm
Trade Counter 11am-6pm daily