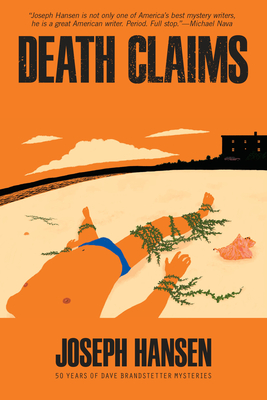 This is book number 2 in the A Dave Brandstetter Mystery series.

Death claims investigator Dave Brandstetter enters a world thespians and booksellers as he uncovers the true story behind the death of a rare book dealer in this noir-spun masterpiece of California crime fiction.

Since a burning accident that left him painfully disfigured, John Oats, a well-liked collectible book dealer, has been self-isolating at his beach house in Arena Blanca, California. An avid swimmer, John Oats had taken to night swimming to hide his injuries from daytime beachgoers. When his body is found one morning smashed against the rocks at the treacherous point near the house, the authorities rule it “Death by Misadventure.”

Insurance companies don’t much care for verdicts like that and therefore Medallion Insurance, the policy holder for Oats’s substantial life insurance policy, sends out its best investigator, Dave Brandstetter, to poke holes in the story. The night Oats died there was a dangerous storm along the coast, and Brandstetter finds it hard to believe that the bookseller, a lifelong swimmer, would have gone out. As his investigation reveals more of John Oats’s sad story Brandstetter learns that the motives for murder are many.

But Brandstetter has his own problems to deal with. Still mourning the death of his partner, Rod, Dave is navigating his own twilight world of grief. His new lover, Doug, is also grieving, and the two men must come to a reckoning of whether their love is an ersatz stand-in for their lost partners or something more.

PRAISE FOR THE DAVE BRANDSETTER NOVELS