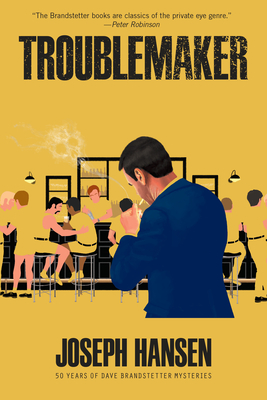 This is book number 3 in the A Dave Brandstetter Mystery series.

Love and money are the easy motives in the death of a California beachfront nightclub owner, but death claims investigator Dave Brandstetter is certain of one thing: the case is going to be far from easy and the police have it all wrong.

Rick Wendell wouldn’t hurt a flea. The big, jovial owner of the Hang Ten, a surfing-themed gay bay on the boardwalk, was loved by regulars and new arrivals alike. But Rick was found naked and dead, with a local hustler named Larry Johns standing over him, smoking gun in hand. Wendell’s death is ruled as a homicide and Johns is arrested. Everyone thinks it’s a simple open-and-shut case. Everyone except the death claims investigator, Dave Brandstetter.

Brandstetter, a homosexual himself, doesn’t make the same assumptions about the crime scene and easy story it tells. Larry Johns had enough time to escape had he wanted to. Not to mention Johns lacked any discernable motive, especially since the $200 in Wendell’s wallet was left untouched. In an investigation that takes him from sun-scorched hillside ranches to seedy boardwalk bars, Brandstetter gets to the bottom of a twisty mystery in this hardboiled and entertaining portrait of the ’70s gay culture by groundbreaking poet and award-winning crime writer Joseph Hansen.

PRAISE FOR THE DAVE BRANDSTETTER NOVELS

"I can only applaud the republication of Joseph Hansen's Dave Brandstetter books. I've increasingly come to regard the phrase 'an important writer of crime fiction' as oxymoronic, but if one's going to use the label, Hansen's not an unreasonable bearer of it."
—Lawrence Block
“Incredible books, much overlooked.”
—Jeff Abbott