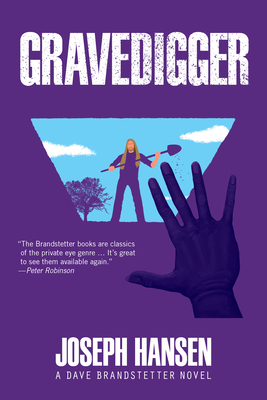 This is book number 6 in the A Dave Brandstetter Mystery series.

A cult leader named Azrael perpetrates a brutal mass murder and afterwards a slimy lawyer is trying to claim the life insurance policy for his missing daughter; it's the early '80s in Los Angeles and private investigator Dave Brandstetter has a new love in his life as exciting as this case is dreadful.

Two years ago Charles Westover disgraced himself and his family when he was disbarred for bribery. Westover’s daughter Serenity, disgusted with her once beloved father, ran away to a cult founded by a mesmerizingly handsome young man, a self-appointed messiah going by the grimly grandiose name of Azrael. The whereabouts of Serenity pass unknown for years until the police raid Azrael’s compound and discover that the cult leader lived up to his ghastly “Angel of Death” moniker.

Thinking his daughter has been murdered, Charles Westover claims her life insurance, and then he too vanishes. Insurance companies don’t like to cut a check without a body and especially don’t like cutting a check to someone who is also missing. Hired as a private investigator for Banner Insurance, David Brandstetter quickly finds himself in a complicated maze of lies and hidden histories. And Dave suspects that, just like in the labyrinths of old, there will be a monster at the end of it.

It's not all bad times and extreme hazard for our man Dave. A passionate romance has entered his life with the reappearance of Cecil Harris, a handsome young African American investigative reporter for the local news station looking to get to the bottom of a different kind of story.

PRAISE FOR THE DAVE BRANDSETTER NOVELS