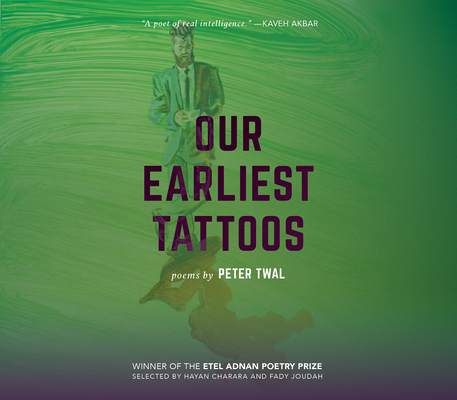 Because of the intense connection we feel with music, we can remember song lyrics even when we have forgotten the details of our personal lives—even when all else fails, a song can transport us back. In this sense, a song is capable of suspending time. Drawing on this perspective, Peter Twal’s playful, inventive, and wickedly sentimental debut collection takes a set of song lyrics (LCD Soundsystem’s “All My Friends”) and treats them as an artifact of memory itself, blurring the line between self and other, between past and present.

Each poem in Our Earliest Tattoos acts as a passageway from one lyric in the song to the next—the author pries these lyrics open like doors and builds whole rooms between them. As readers progress through the house he builds, they hear the song as the soundtrack to their discoveries: in one room, of party leftovers, and in another, an exploding museum of natural history.

Like memory, the characters in these poems are both present and absent. Sustained by smart phones, they are in constant communication despite always seeming to have just left the room. In one poem, the lonely Mars rover thumbs constantly through pictures on its phone; in another, Death trades in his scythe for a cell phone he uses throughout the book to send disquieting text messages. God, too, is text-happy—when the speaker asks, “Does the universe even care?” God texts back to say, “Don’t forget the twelve / bucks you owe me this year.”

Wise, funny, and wholly original, the long-lined sonnets that make up Our Earliest Tattoos celebrate the surreal, embracing the nature of memory as fragmented—as is visible in the fractured nature of the lines—and inherently bizarre.

Peter Twal is a Jordanian-American electrical engineer from Baton Rouge, Louisiana. His poems have appeared in Best New Poets, Kenyon Review, West Branch, and elsewhere. He is a recipient of the Samuel and Mary Anne Hazo Poetry Award.

“Reading Peter Twal’s Our Earliest Tattoos, I kept thinking of Wallace Stevens’ famous pronouncement that a poem should ‘resist the intelligence, almost successfully.’ Throughout the book, we see a poet of real intelligence who is also intensely attuned to the wants and needs of language itself. Twal’s sky is ‘so heady, thinking the world of itself’—an earth is summoned, called into being by the ether’s own imagination. There is massive intellect pulsing through these poems, which are inflected by the Mars Rover and LCD Soundsystem and God and gravity and and and. But Twal’s genius is in the way he knows exactly when to yield the floor to imagination, which wonders and wanders through love and loneliness and friendship and grief in a million fascinating ways throughout Our Earliest Tattoos. ‘I will love my monster,’ Twal writes, and then he proceeds to show us.”
—Kaveh Akbar, author of Calling a Wolf a Wolf

“Peter Twal’s sonnet sequence explodes inside a pop song. It’s a song of youth and extinction, doomed and well dressed. His instincts are at once traditional and contemporary, his lovers garlanded with strobe light and TV snow and IEDs and birdflight. It’s a thrill to be in the presence of a poet of such a vision, a smith of such lovely smithereens.”
—Joyelle McSweeney, author of The Necropastoral

“Peter Twal’s beautiful debut makes wholly new frames for figuring a generation too alive for nostalgia and too awake for solipsism. Like a body from one of Goya’s Pinturas Negras, Twal’s speaker emerges out of his knowing impossibilities of scale into our contemporary moment all while coolly texting Death ‘Your attention/ to detail though.’ Nimble in its music and kind, this book is a reservoir of what we wish we’d said, especially when death texts back.”
—Farid Matuk, author of The Real Horse
My Account • Sign In • Sign Out • Register
NEW & USED BOOKS
AUTHOR EVENTS • GIFTS
Tempe
6428 South McClintock Drive
480.730.0205
[Google Map]
10am-7pm daily