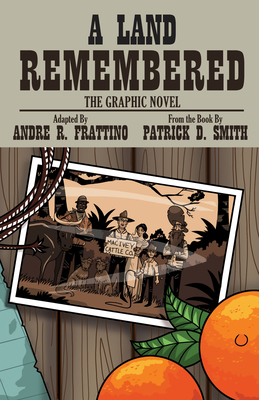 This graphic novel version of A Land Remembered, the bestselling novel by Patrick D. Smith, covers three generations of the MacIvey family in the Florida frontier from the 1850s to the 1960s.

In A Land Remembered, Patrick Smith tells the story of a Florida family who battle the hardships of the frontier to rise from a dirt-poor Cracker life to the wealth and standing of real estate tycoons. The story opens in 1858, when Tobias MacIvey arrives in the Florida wilderness to start a new life with his wife and infant son, and ends two generations later in 1968 with Solomon MacIvey, who realizes that the land has been exploited far beyond human need. The sweeping story that emerges is a rich, rugged Florida history featuring a memorable cast of crusty, indomitable Crackers battling wild animals, rustlers, Confederate deserters, mosquitoes, starvation, hurricanes, and freezes to carve a kingdom out of the swamp. But their most formidable adversary turns out to be greed, including finally their own. Love and tenderness are here too: the hopes and passions of each new generation, friendships with the persecuted blacks and Indians, and respect for the land and its wildlife.

A Land Remembered has been ranked #1 Best Florida Book eight times in annual polls conducted by Florida Monthly Magazine and is winner of the Florida Historical Society's Tebeau Prize as the Most Outstanding Florida Historical Novel.

Born and raised in the wilds of North Florida, Andre Frattino has spent his entire life spinning stories against the backdrop of "the land of flowers." After completing his Bachelor's in Sequential Art from the Savannah College of Art and Design, Andre returned to his home state in 2011. There he went on to work as a staff cartoonist for The Independent Florida Alligator, on the popular Son of a Gator comic strip while earning his Master's in Art Education at the University of Florida. A history buff, art educator, and lover of Florida flora and fauna, Andre is a proponent of using the graphic novel form to share history and inspire next generations. Andre currently lives in Savannah, Georgia, and splits his time between his duties of being a graphic novelist and conducting ghost tours in the historic coastal empire. A native of Mendenhall, Mississippi, Patrick D. Smith moved to Florida in 1966 and began writing the novels about Florida that would make bring him lifelong recognition: The River Is Home, The Beginning, Forever Island, Angel City, Allapattah, and A Land Remembered. Smith was nominated three times for the Pulitzer Prize: in 1973 for Forever Island; in 1978 for Angel City; and in 1984 for A Land Remembered, which was an Editors' Choice selection of the New York Times Book Review. In the annual statewide Best of Florida poll conducted by Florida Monthly Magazine, A Land Remembered has been ranked #1 Best Florida Book eight times. In 1985 Smith's lifetime work was nominated for the Nobel Prize for Literature. In 1999 he was inducted into the Florida Artists Hall of Fame, which is the highest cultural honor bestowed by the state of Florida. In 2002, Smith was the recipient of the Florida Historical Society's Fay Schweim Award as the "Greatest Living Floridian." The one-time-only award was established to honor the one individual who has contributed the most to Florida in recent history. Additionally, Smith earned the 2012 Florida Lifetime Achievement Award for Writing presented by the Florida Humanities Council. The judges felt that "Patrick Smith's books have been hugely significant to the citizens of Florida . . . [and] that A Land Remembered is an iconic Florida book that has resonated with generations of Floridians in helping people understand the history of this remarkable state."