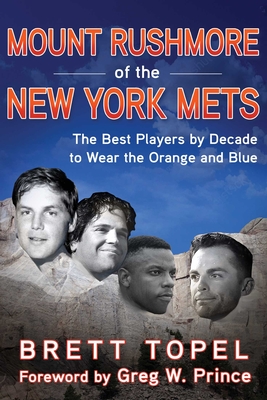 Mount Rushmore, located in the Black Hills of Keystone, South Dakota, is one of the most iconic landmarks in the United States. The face of the mountain features 60-foot heads of Presidents George Washington, Thomas Jefferson, Theodore Roosevelt, and Abraham Lincoln. It depicts four of the greatest men our country has ever known.

In recent years, it has become fashionable for sports fans to select the Mount Rushmore of their franchise’s history. For some franchise’s, which have been around for 100+ years, it can be a daunting task. Even for younger franchises, such as the New York Mets, picking a Mount Rushmore can be a challenge. Mostly because fans always seem to favor players that they have seen play—leading older and younger fans to differ on who belongs carved on that fictional mountain in Queens.

In 2015, Major League Baseball announced its decision for each team’s Mount Rushmore. For the Mets, voters chose Keith Hernandez, Mike Piazza, Tom Seaver, and David Wright. No one would argue that Tom Seaver is on the franchise’s Mount Rushmore. He was, after all, “The Franchise.” Some might even argue that the Mets’ Mount Rushmore is Tom Seaver four times! However, that not-withstanding, when it comes to rounding out the other three players, did MLB get it right??

Thankfully, Mount Rushmore of the New York Mets tackles such a question. Covering the team by decade, author Brett Topel share the best players from the team’s almost sixty-year history. From Jerry Koosman and Ed Kranepool, Dwight Gooden and Darryl Strawberry, to Edgardo Alfonzo and Jose Reyes, each decade is covered, reliving the highs and lows of the Metropolitans.

So whether you remember the Miracle Mets, the Amazin’ run of 1986, or the almost of the 2000s, Mount Rushmore of the New York Mets breaks down the fan favorites who earned their prominence in the Polo Grounds, Shea Stadium, and Citi Field.

Brett Topel is the author of three books—So You Think You’re a New York Mets Fan?: Stars, Stats, Records, and Memories for True Diehards, When Shea Was Home: The Story of the 1975 Mets, Yankees, Giants and Jets, and Simply the Best: The Story of the 1929-31 Philadelphia Athletics Dynasty. Topel is the Director of Communications at Buckley Country Day School on Long Island and is an adjunct professor of journalism at Adelphi University.