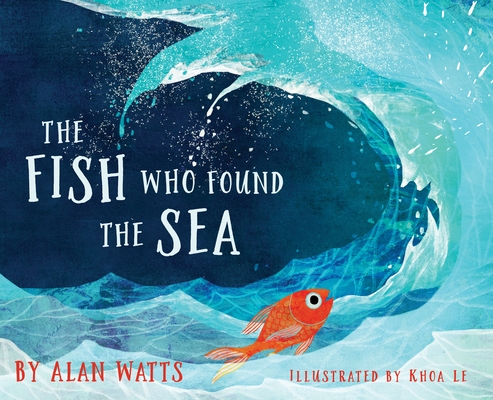 A rediscovered treasure for a new generation: the first and only story for children ever written by Alan Watts.


Alan Watts, beloved for bringing a childlike wonder to the spiritual journey, once wrote a story for children. The Fish Who Found the Sea brings this delightful and wise parable to life for a new generation. Presented with new art from award-winning illustrator Khoa Le, here is a story as timely as it is entertaining—sharing a key message about getting into harmony with the flow of life.


In this tale of a tail, we meet a fish with a curiously familiar problem—he’s gotten himself so mixed up that he spends all his time chasing himself in circles! Only the Great Sea knows how to help our poor fish get out of the mess he’s created with his own runaway thoughts. Here is a parable that perfectly captures the wit and wisdom that have made Alan Watts a timeless teacher we will never outgrow.

For spiritual seekers of many generations, Alan Watts earned a reputation as one of the most accessible—and entertaining—interpreters of Eastern philosophy in the West. Beginning at age 16, when he wrote an article for the journal of the Buddhist Lodge in London, Watts would develop an audience of millions who were enriched through his books, recordings, radio broadcasts, and public talks. In all, Alan Watts wrote more than 25 books, including such classics as The Book: On the Taboo Against Knowing Who You Are and This Is It: and Other Essays on Zen and Spiritual Experience.