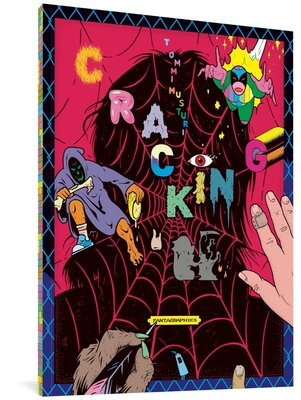 A psychedelic mash-up of different styles and perspectives, rich in form and color, Cracking is a retina-bursting picture book that gathers Tommi Musturi’s work from 2013 to 2020.

A retina-bursting picture book gathering Tommi Musturi’s work from 2013 to 2020, Cracking holds plain art, illustrations, sketchbook material, pixel art, and more. A psychedelic mash-up of different styles and perspectives, rich in form and color, the book also contains an essay by the author (on working on the borders of different arts) and liner notes for everything included. Known to be a stylistic chameleon often dealing with existential themes that twirl around the ideal of ‘freedom’, Cracking is an attention-grabbing showcase of Musturi’s rich visual imagination and graphic style.

Born in 1975, Tommi Musturi is a Finnish cartoonist, illustrator, graphic designer, and artist. In addition to his current ongoing series Walking with Samuel and The Books of Hope, Musturi contributes to the studio Kutikuti based out of Helsinki, which creates, publishes, and teaches comic art. Seeing that there was an unmet demand, Musturi co-founded Huuda Huuda in 2006 to translate international comics into Finnish, publish local comic artists, and get the word out about the vibrant Finnish scene by anthologizing the work in English. Musturi currently resides in Tampere, Finland.