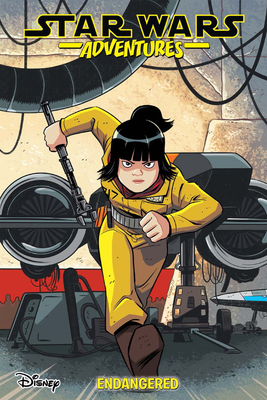 This is book number 3 in the Star Wars Adventures series.

From the days when Imperial power was at its peak to the time of the First Order and the last Jedi, the all-ages adventures continue!

Join Rose Tico-breakout character from The Last Jedi-as she takes center stage in the fight against the First Order! Young Anakin Skywalker competes in a podrace that's unlike any he's seen before! And Ezra Bridger, Hera Syndulla, and the rest of the Ghost crew must retrieve a sacred bird from the Empire's clutches, but pirate Hondo Ohnaka might get it first!

Delilah S. Dawson is the writer of Star Wars: Phasma, Star Wars: The Perfect Weapon, and the Star Wars short story Scorched. Her other work includes the Blud series, Servants of the Storm, the HIT series, Wake of Vultures and Conspiracy of Ravens (both as Lila Bowen), and a variety of short stories in anthologies like Hellboy: An Assortment of Horrors; Carniepunk; Three Slices; and Last Night, A Superhero Saved My Life. Her first comic, Ladycastle, is out now from BOOM! Studios.

Delilah is the winner of the 2015 Fantasy Book of the Year from RT Book Reviews for Wake of Vultures and the 2013 Steampunk Book of the Year and May Seal of Excellence for the Blud book Wicked As She Wants. She has earned stars from Kirkus, Publishers Weekly, and Library Journal for Wake of Vultures, as well as a star from Library Journal for the Blud e-novella The Damsel and the Daggerman.

"These stories are perfect for young readers and will also bring a smile to the face of older fans. All ages fun for those that want classic adventures with subtle lessons." –SciFiPulse

"This is a great series to pick up for younger readers who are itching to get in on Star Wars with their parents." –Newsarama

"It feels like a good old fashioned 'Saturday Morning' comic or cartoon: it's bright, colorful and a lot of fun. For younger Star Wars fans, it's perfect." –DisKingdom.com