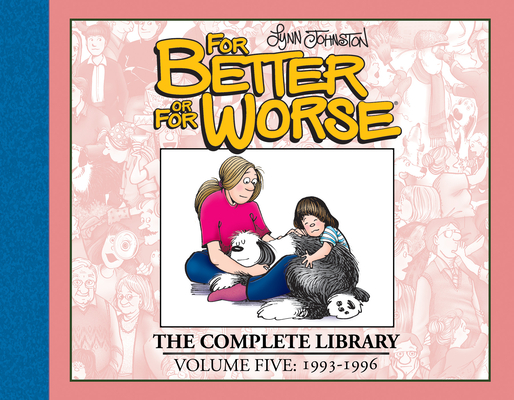 This is book number 5 in the For Better or For Worse series.

This volume features one of the most beloved stories in the strip's history--the saga of Farley, the family dog. When little April gets into big trouble, it is up to Farley to come to her rescue. But that isn't the only big event in the lives of the Pattersons. Michael heads off to college and begins his road to journalism. Along the way, he meets his new roommate and is reunited with an old flame. Elizabeth, meanwhile, navigates her teen years, has her first serious relationship, and spends a summer on the farm--a rite of passage that Michael took five years earlier. Back at home, Elly and John deal with adult problems such as house renovations, career changes, and menopause.

Lynn Johnston keeps the ongoing narrative fresh and interesting, developing each character in realistic ways while successfully toeing the line between soap opera drama and situation comedy. Includes every comic strip from April 25, 1993 to August 31, 1996.

Each volume also contains a number of annotations by Lynn Johnston detailing motivations for certain strips, funny anecdotes, observations about the reaction from fans, and much more!

“Johnston’s groundbreaking strip remains critical without being caustic and sweet without being sentimental. Here, from a woman's perspective,  was the reality of daily domestic life—beautifully drawn social satire, unafraid  to skewer male chauvinism, or explore twin challenges of women's lib and motherhood.” --The Globe and Mail

“An exquisite tome…. Fans of the highest virtuosity in cartooning will relish this deluxe introduction to the Patterson’s heartfelt and delightful story” --Library Journal

“Anyone who has been a kid or has been a parent ought to find something to connect or re-connect with.” --Cinema Sentries