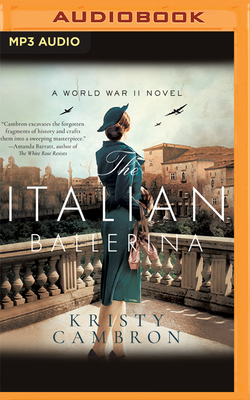 At the height of the Nazi occupation of Rome, an unlikely band of heroes comes together to save innocent lives in this breathtaking World War II novel based on real historical events.

Rome, 1943. With the fall of Italy's Fascist government and the Nazi regime occupying the streets of Rome, British ballerina Julia Bradbury is stranded and forced to take refuge at a hospital on Tiber Island. But when she learns of a deadly sickness that is sweeping through the quarantine wards--a fake disease known only as Syndrome K--she is drawn into one of the greatest cons in history. Alongside hospital staff, friars of the adjoining church, and two Allied medics, Julia risks everything to rescue Italian Jews from the deadly clutches of the Holocaust. But when one little girl who dreams of becoming a ballerina arrives at their door, Julia and the others are determined to reunite the young dancer with her family--if only she would reveal one crucial secret: her name.

Present Day. With the recent loss of her grandfather--a beloved small-town doctor and WWII veteran--Delaney Coleman returns home to help her aging parents, even as she struggles to pick up the pieces of her own life. When a mysterious Italian woman claims she owns one of the family's precious heirlooms, Delaney is compelled to uncover what's true of her grandfather's hidden past. Together with the woman's skeptical but charming grandson, Delaney learns of a Roman hospital that saved hundreds of Jewish people during the war. Soon, everything Delaney thought she knew about her grandfather comes into question as she wrestles with the possibility that the man she'd revered all her life had unknown ties to Rome and may have taken noble secrets to his grave.

Based on true accounts of the invented Syndrome K sickness, The Italian Ballerina journeys from the Allied storming of the beaches at Salerno to the London ballet stage and the war-torn streets of WWII Rome, exploring the sometimes heart-wrenching choices we must make to find faith and forgiveness, and how saving just one life can impact countless others.