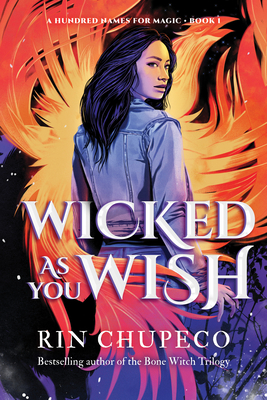 This is book number 1 in the A Hundred Names for Magic series.

What if every story you'd ever heard was true? Jack killed the giants. Red slayed the wolf. Rapunzel fled the tower. But the greatest one of all, had yet to be told.

Once upon a time, the magical Kingdom of Avalon was left to wither and die after the Snow Queen encased it in ice. Its former citizens are now refugees. Which is why crown prince Alex and his protectors are stuck in… Arizona.

Tala Makiling has lived her life as an outsider. Her family curse, the one that's doomed her to be a spellbreaker, someone who destroys magic, hasn't won her too many friends. Except Alex, who trusts her and her family to keep his royal identity a secret.

And then one night, a famous creature of legend, the Firebird, appears in their tiny town, reigniting hope for their abandoned homeland. Alex and Tala team up with a ragtag group of new friends to journey back to Avalon. Their path is filled with danger—from deadly prophecies, to terrifying ice wolves, a traitor among them, and the Snow Queen herself. But if they succeed… their story would be legendary.

"A great read for fans of fairy tales, myths and legends… Come for the adventure, stay for the sassy jerkwad firebird."—Kendare Blake, #1 New York Times bestselling author of the Three Dark Crowns series

Gripping, fantastical, and delightfully funny, Wicked As You Wish is perfect for readers looking for:

"Combining legends, myths, fairy tales, and classic children's literature from Oz to Neverland, Chupeco (The Bone Witch) creates an enchanting story that is both a feast for the senses and a unique spin on the hero's journey…A nail-biting quest that introduces a gripping new series."—STARRED review, Publishers Weekly

Despite uncanny resemblances to Japanese revenants, Rin Chupeco has always maintained their sense of humor. Raised in Manila, Philippines, they keep four pets: a dog, two birds, and a husband. They’ve been a technical writer and a travel blogger but now make things up for a living. They are the author of The Girl from the Well, The Suffering, The Bone Witch trilogy, and the A Hundred Names for Magic trilogy. Connect with Rin at rinchupeco.com.