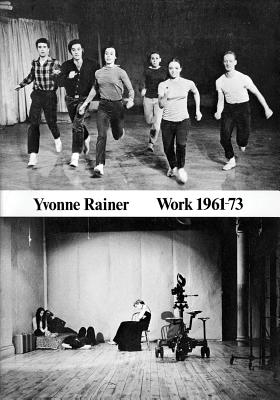 "It goes without saying that a dance is a dance and a book about dance is a book. Though they may meet at the intersection of Art and Good Intentions, I find myself greedy. I have a longstanding infatuation with language, a not-easily assailed conviction that it, above all else, offers a key to clarity. Not that it can replace experience, but rather holds a mirror to our experience, gives us distance when we need it. So here I am, in a sense, trying to 'replace' my performances with a book, greedily pushing language to clarify what already was clear in other terms. But, alas, gone. This has seemed one good reason to compile a book out of the remains of my performances, letting the language fall where it may. Let it be said 'She usually makes performances and has also made a book.'" -Yvonne Rainer

Forty-five years after its publication, Primary Information brings Yvonne Rainer's classic book back into print in an exact facsimile.

In 1974, Yvonne Rainer published Work 1961-73, an illustrated catalog of her performance works up to that point. In these years, as the art world turned toward minimalism, Rainer and her Judson Dance Theater colleagues were engaged in a parallel, and equally radical, redefinition of dance. Stripping dance of its pomp and self-serious virtuosity, they created what dancer and choreographer Pat Catterson has called "the people's dance." Or, as Rainer put it, instead of the "overblown plot" of traditional dance, she explored the "obvious" alternative: "stand, walk, run, eat, carry bricks, show movies, or move and be moved by some thing other than oneself." Work 1961-73 chronicles the years when Rainer found herself and her work at the heart of a revolution in dance, performance and art. Written in Rainer's wonderful frank, funny and perceptive prose, and illustrated with photographs, handwritten scores, sketches, press articles and ephemera, Work 1961-73 is a period document and an instruction manual, an archive and a manifesto. A sought-after, rare classic, Work 1961-73 is brought back into print in a true facsimile edition by Primary Information; the only change is the small addition of new notes at the back of the book. One of the most influential artists of her generation, dancer, choreographer and filmmaker Yvonne Rainer (born 1934) was a founding member of Judson Dance Theater in New York City and a leading figure in the development of minimalist and postmodern dance.