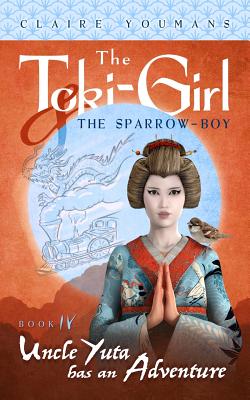 He was a warrior monk. Now he's wearing a western business suit. But will he risk his family's future to fight for what's right?

Japan, 1873. Yuta struggles to keep up with both his country's rapid changes and his magical niece and nephew. And though he likes the look of his fancy new western suit, it doesn't seem to fit with his trusted old-school weapons. But when he travels to a major event in Japan's history, he'll need both business and blade to survive.

As Yuta rides on the exciting new train he sees Japan's industrial advances bearing down on his way of life at breakneck speed. While he tries to embrace the change, watching a textile factory mistreat its indentured workers makes the ex-monk's blood boil.

Can Yuta secure his nation's future and prevent progress from exploiting his people?

Uncle Yuta Has An Adventure is the fourth book in the Toki-Girl and the Sparrow-Boy, historical fantasy series. If you like intriguing conflicts, clashes of culture, and rich Japanese settings, then you'll love Claire Youmans' well-crafted novel from the Meiji Era.