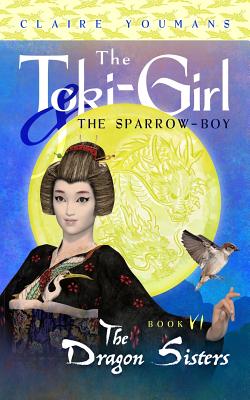 Torn between dragon and human, two sisters must embrace friends and family to survive.

Japan, 1875. Dragon-girl Renko faces an uncertain future. As the country around her rapidly changes, she struggles to figure out where she fits in. So when a kind gesture uncovers a sex trafficking scheme, she's even more conflicted about her ability to take human form.

Otohime fears risking her heart again. Long after the death of her human husband, she's still unsure if she's ready for love with a dragon consort. But after exploring Japan's rocky volcanoes with a handsome new friend, a twist of fate leaves her and Renko trapped and helpless.

Drained of their powerful abilities, Renko and Otohime must put their faith in half- and full-humans to escape with their lives.

Can the two dragons embrace both sides of their nature and give their humanity a second chance?

The Dragon Sisters is the sixth book in the compelling Toki-Girl and the Sparrow-Boy historical fantasy series. If you like fast-paced adventures, engaging characters, and Japanese folklore, then you'll love Claire Youmans' intricately woven tale from the Meiji Era.