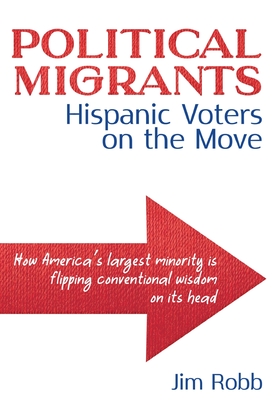 The biggest story in American politics. . .

. . . is the shift of Hispanic voters from reliable Democratic supporters to a much less predictable mix, with a growing segment making their home in the Republican Party.

America's Hispanic population has tripled in only 30 years, from 23 million to 62 million. Two-thirds were born in this country, and they're voting For years, it was assumed that the vast majority of Hispanics would be loyal Democrats. But the last two presidential elections, and a plethora of new polling data, show Hispanics to be swing voters. More than a third are voting Republican, and polls suggest that number may go way up soon.

Political Migrants: Hispanic Voters on the Move uncovers the evidence that vast numbers of Hispanics are moving closer to the political right and shows exactly why that is happening, even as the Republican Party has increasingly been identiﬁed with positions on immigration that were supposed to drive them away.

Further, the book explores how the Democratic Party has alienated so many of what was until recently a reliable bloc of voters.

For this book, Rasmussen Reports conducted a large, detailed poll that provides new insight into the complex political opinions of American Hispanics, how they are leaning on the next two national elections; which Hispanics are trending Republican, and why.

In 11 well-researched, approachable, crisply written chapters, author Jim Robb details the many ideas about how Hispanics would behave politically, and why so many of these prophecies proved wrong. He brieﬂy reviews the unique history of Hispanics in America, and dispels the many myths that surround them. He shows exactly how and why so many are increasingly joining working-class voters in shifting towards the GOP.

Finally, Robb outlines how Republicans can attract more Hispanics to their party, while also tipping oﬀ Democrats on how they could change their messaging to retain their advantage with the largest ethnic minority group in the country.